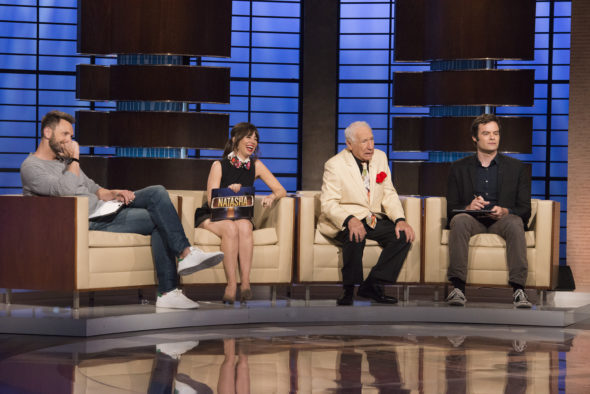 What’s the true story? Has the To Tell the Truth TV show been cancelled or renewed for a fourth season on ABC? The television vulture is watching all the latest cancellation and renewal news, so this page is the place to track the status of To Tell the Truth, season four. Bookmark it, or subscribe for the latest updates. Remember, the television vulture is watching your shows. Are you?

An ABC game show, hosted by Anthony Anderson, To Tell the Truth features a panel of four celebrities who are presented with three people who all claim to be the same person with the same incredible talent, job, or achievement. One is sworn to tell the truth, while the others are not. Panelists this season include Octavia Spencer, Dermot Mulroney, Nikki Glaser, Gabby Douglas, Mel Brooks, Joel McHale, Bill Hader and Natasha Leggero. Anderson’s mother, Doris, returns with commentary, too.

The third season of To Tell the Truth averaged a 0.75 rating in the 18-49 demographic and 3.89 million viewers. Compared to season two, that’s down by 4% the demo and up by 7% in viewership. Find out how To Tell the Truth stacks up against other ABC TV shows.

Will ABC cancel or renew To Tell the Truth for season four? The ratings have been okay and it fits well with the network’s other game shows so I suspect it will be renewed. For now, I’ll keep an eye on the ratings and update this page with breaking developments. Subscribe for free alerts on To Tell the Truth cancellation or renewal news.

8/7/2018 Status Update: To Tell the Truth has been renewed for season four on ABC. Details here.

What do you think? Did you think the To Tell the Truth TV show would be renewed for season four? How would you feel if ABC had cancelled this TV series, instead?

I’ve always enjoyed this show years ago and would like this version but for Ms. Doris who I cannot find a good reason for her to be on the show. She is sometimes vulgar and loud and I don’t enjoy her so called humor and I quite frankly doubt if a white game show host would put his mother on the show. I had to quit watching the show and I was very disappointed to have to do so as I did enjoy all other aspects of the show.

I believe I am the only person, living or expired, to have donated at least one pint of blood in each of the fifty states and Washington, D.C. Is there any interest for you to consider me appearing on To Tell The Truth? I am a very likable fellow. I do have proof of the donations and have been attempting to get into the Guinness World Book of Records.

To Tell The Truth is my favorite TV show. It’s genuine, extremely funny, and just pure joy. I like the gifs they come up with; I like how they have conversations with each other and we get to listen to some part of the conversation when they return from commercials. It’s cute. Unlike, those other shows where they’re all quiet and ‘ready to continue’ when the commercials are over; Mrs. Doris is so funny. I mean, what can I say? This show is one of a kind, i mean, what other tv show host shares the limelight with their awesome… Read more »