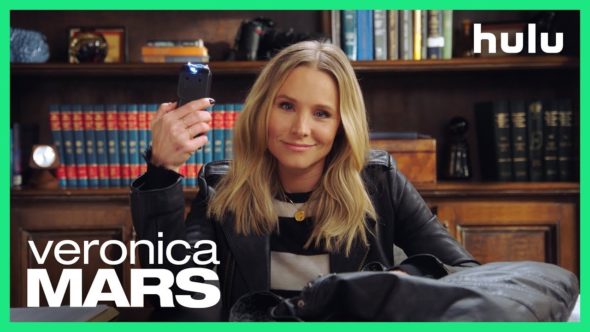 Good news, marshmallows. Hulu has revealed a premiere date for their revival of the Veronica Mars TV show. The teen noir mystery series initially ran for three seasons and 64 episodes from September 2004 until May 2007. The first two seasons ran on UPN and then, the final season aired on the newly established CW network.

But, that wasn’t the end of the story. The series was beloved by its fans so, star Kristen Bell and creator Rob Thomas started a Kickstarter campaign in 2013. The campaign was very successful, raised $5.7 million, and a Veronica Mars movie was released in March 2014.

Last September, Hulu announced that they’d ordered an eight-episode “limited series” to continue the story of the female private detective and the residents of Neptune, California. We now know that those episodes will debut on July 26th on Hulu. The streaming service will release the episodes all at once.

Hulu is now referring to this “limited series” as “season 4” so it would seem that a fifth season is possible. Given the show’s track record, I don’t think this will be the last we’ll see of Veronica and company.

Here’s the info and a little preview from Hulu:

Synopsis: Spring breakers are getting murdered in Neptune, thereby decimating the seaside town’s lifeblood tourist industry. After Mars Investigations is hired by the family of one of the victims to find their son’s killer, Veronica is drawn into an epic eight-episode mystery that pits the enclave’s wealthy elites, who would rather put an end to the month-long bacchanalia, against a working class that relies on the cash influx that comes with being the West Coast’s answer to Daytona Beach.

SPOILER ALERT: The first episode will be titled “Spring Break Forever” and was written by Thomas and directed by Michael Lehmann.

What do you think? Are you a fan of the Veronica Mars series? Will you be watching season four?