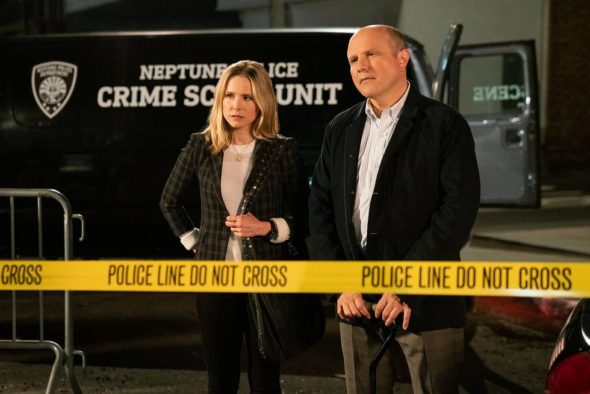 Will our favorite female detective stay on the case? Has the Veronica Mars TV show been cancelled or renewed for a fifth season on Hulu? The television vulture is watching all the latest TV cancellation and renewal news, so this page is the place to track the status of Veronica Mars season five. Bookmark it, or subscribe for the latest updates. Remember, the television vulture is watching your shows. Are you?

Unless they decide to publicize viewership statistics, it is difficult to predict whether Hulu will cancel or renew Veronica Mars for season five. That being said, I suspect that it will be renewed and Hulu may have made a two year deal to start. For now, I’ll keep an eye on the trades and update this page with breaking developments. Subscribe for free Veronica Mars cancellation and renewal alerts.

What do you think? Do you hope the Veronica Mars TV series will be renewed for a fifth season? How would you feel if Hulu cancelled this TV show, instead?

I, for one, very much hope that all the talk of Logan Echolls being dead so that Veronica can be the underdog, and how she can’t be a kickass detective if she’s got a boyfriend at home, and how you can’t have a show if people are perfect and nothing happens?? (that last one was Kristen’s line. The rest is from creator Rob Thomas) is all one Big Fat Lie. God, I hope so! I far prefer to entertain the possibility that my death was faked by my Naval Intelligence colleagues who were following the bombing case and had deciphered… Read more »

Renew Veronica Mars for a season 5! I need to see more.

I love this show I was so excited when they brought it back to life, Please renew its my favorite show

Really hope he doesn’t get a season 5. He’s already ruined Veronica Mars enough for a lifetime

I really, REALLY hope it is NOT renewed for a new season. Logan Echolls was my favorite character. He and Veronica helped me through depression. I do not want the show to continue without him.

Everyone: Say no to a season 5!

As RT said, if the numbers at HULU are good, there will be a season 5, I already know 1500 people who have directly canceled their HULU subscriptions due to RT horrible writing skills, I doubt EVER RT will get another series without someone else name attached to it. Enjoy your fast trip down to the bottom RT, you have earned it 😀