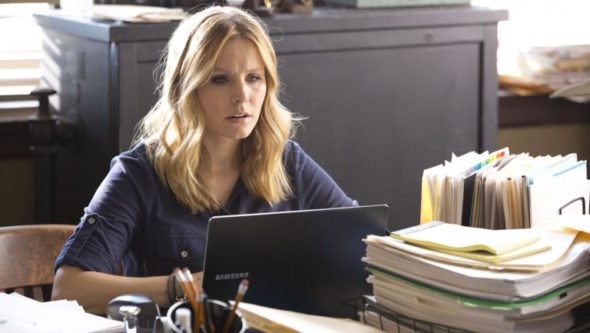 Will Veronica Mars return for a fifth season? Recently, creator Rob Thomas spoke with TVLine about the future of the Hulu TV show.

In the interview, Thomas said Veronica Mars will continue as long as the show performs well on Hulu:

They have checked mine and Kristen’s availability moving forward. Bottom line: If we do good numbers for Hulu, we will be doing more [seasons] for Hulu. I think they really like the show. But I also think that they need to see that people are watching it.”

And what does Thomas have planned for future seasons? He says Agatha Christie is an inspiration:

I have a couple ideas in my head, one of which is very Agatha Christie-[esque]. It won’t be this exactly, but some version of Murder in a Manor House. Something that is so explicitly detective-y… I want to really lean into that we are a detective show… I feel like Season 4 was the bridge season, to take us from half soap opera/half mystery show to full detective/mystery show.”

What do you think? Have you started watching the new season of Veronica Mars? Do you want the show to continue?

I will be very disappointed if Veronica Mars doesn’t get a season 5. I was shocked that Jason Doehring’s character was killed off but understand why. Will miss seeing him on the show. I wish that HULU would continue showing the the earlier 4 seasons – I need to refresh my memory since it’s been awhile since I last watched them. Please bring VM back for season 5!

Season 4 was excellent. Was kind of disappointed that Veronica doesn’t get to be happy. Season 4 was as riveting to me as the first three seasons. The quality was also as excellent although a slightly different edge. Need more seasons!

Love the show ! I want to see it continue for many more seasons! I had never seen it until I discovered the movie. Then I watched the old seasons and couldn’t wait for this new one. Please renew and keep it coming on Hulu!

Love this show and all the actors in it. More, please!!!