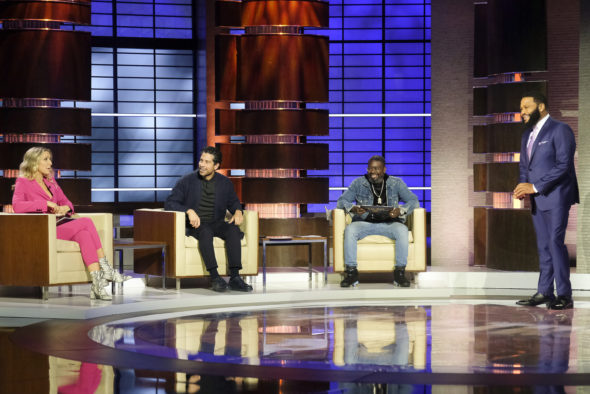 We can be honest: ABC still likes the To Tell the Truth TV show and a seventh season is on the way. *Update below

A revival of the classic game show, To Tell the Truth is hosted by Anthony Anderson. The show features a panel of celebrities who are presented with three people who all claim to be the same person with the same incredible talent, job, or achievement. One is sworn to tell the truth, while the others are not. Anderson’s Mama Doris returns with commentary. Panelists in season six include Jimmy Kimmel, Andrea Savage, Sherri Shepherd, Lil Rel Howery, Adam Rodriguez, Nikki Glaser, Joel McHale, Cedric the Entertainer, and Malin Åkerman.

The sixth season of To Tell the Truth averages a 0.47 rating in the 18-49 demographic and 3.38 million viewers. Compared to season five, that’s down by 16% in the demo and up by 4% in viewership. The 20 episodes aired from January until September of 2021.

Anderson appeared on a recent episode of ABC’s Celebrity Wheel of Fortune and told host Pat Sajak that production on the seventh season of Truth had recently wrapped.  Thanks to reader MV for the tip.

*Update: Anderson subsequently revealed that season six will resume on Tuesday, February 22nd. Though it’s called a “season premiere” an ABC representative has confirmed that it’s a continuation of season six.

What do you think? Do you enjoy the To Tell the Truth TV show? Do you plan to watch the seventh season of this game show on ABC?

I really get a good laugh when I watchTo tell the truth. I’m glad it’s coming back

Im so glad its coming back on this month. I love the show.