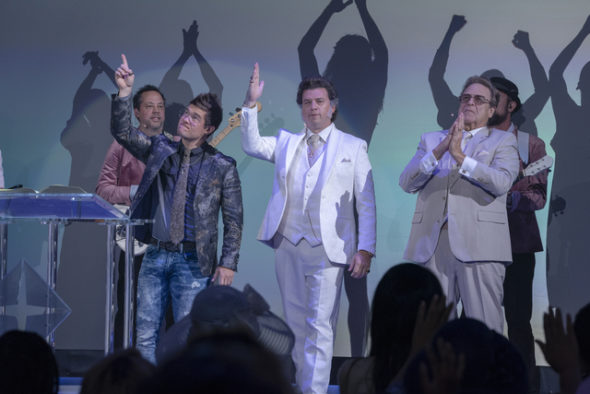 HBO has blessed The Righteous Gemstones. The dark comedy series has been renewed for a third season by the cable channel. Four episodes of the current second season have aired thus far.

The Righteous Gemstones TV show stars Danny McBride, Adam Devine, Edi Patterson, John Goodman, Cassidy Freeman, Tony Cavalero, Tim Baltz, Skyler Gisondo, and Greg Alan Williams. Recurring actors include Walton Goggins, Jennifer Nettles, Jody Hill, Valyn Hall, Kelton DuMont, Gavin Munn, Jason Schwartzman, Eric Roberts, Eric Andre, and Jessica Lowe. The comedy centers on the Gemstones, a family of televangelists. Although patriarch Dr. Eli Gemstone (Goodman) built an empire out of his televangelism and megachurch ministries, he finds himself and his family at something of a crossroads. Season two finds the Gemstone family threatened by outsiders from both the past and present who wish to destroy their empire.

The second season of The Righteous Gemstones averages a 0.08 rating in the 18-49 demographic and 241,000 viewers in the live+same day ratings (includes all DVR playback through 3:00 AM). Compared to season one, that’s down by 61% in the demo and down by 57% in viewership in the live+same day ratings (including DVR playback through 3:00 AM).

· HBO announced today that the critically acclaimed comedy series THE RIGHTEOUS GEMSTONES has been renewed for a third season.

· The nine-episode second season of THE RIGHTEOUS GEMSTONES, starring Danny McBride, John Goodman, Edi Patterson and Adam Devine, kicked off on January 9 with episodes airing weekly on HBO and HBO Max. The season two finale airs on February 27. Created, written and executive produced by Danny McBride (HBO’s “Vice Principals” and “Eastbound & Down”), and marking his third HBO comedy series from Rough House Pictures, THE RIGHTEOUS GEMSTONES tells the story of a world-famous televangelist family with a long tradition of deviance, greed and charitable work. Season two finds our blessed Gemstone family threatened by outsiders from both the past and present who wish to destroy their empire. McBride collaborators Jody Hill and David Gordon Green also serve as executive producers and directors.

· IndieWire hails season two of THE RIGHTEOUS GEMSTONES as “a pulpit for comedy” that “keeps elevating the laughs to heavenly heights” and Vulture praises season two for being a “poignant exploration of generational change and individual purpose” and “a showcase for McBride as a writer and director.” “[McBride] has never been funnier” states Esquire, with Slate hailing the series as “the funniest one currently on the air.” Collider declared the series as “one of the greatest ensembles in comedic television.”

· Amy Gravitt, executive vice president, HBO Programming quote: “After a season of literal fire and brimstone, blood, sand, and rollerblading, who wouldn’t come back for more?” says Gravitt. “The Gemstone family makes us laugh like nobody else.”

What do you think? Have you watched The Righteous Gemstones TV series on HBO? Are you glad that this comedy series has been renewed for a third season?

A great show about religious fundaMENTALists that even a Devil can appreciate. Good to see it’s getting a better treatment from HBO than some of Showtime’s comedies are getting from that network.