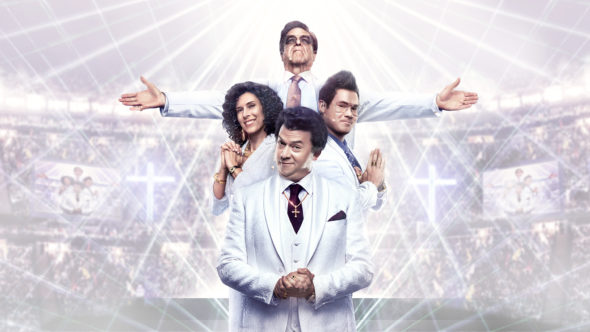 Although HBO comedies don’t often get big Nielsen ratings, every once in a while, one breaks out. The Righteous Gemstones TV show is the premium cable network’s newest entry in this category. It’s from Danny McBride, whose Vice Principals garnered respectable numbers by HBO’s standards. Does it have what it takes to earn a return engagement and be an answer to prayer for the cabler? Will The Righteous Gemstones be cancelled or renewed for season two? Stay tuned. *Status update below.

An HBO TV series, The Righteous Gemstones stars McBride, John Goodman, Edi Patterson, Adam Devine, Walton Goggins, Cassidy Freeman, Tony Cavalero, Tim Baltz, and Greg Alan Williams. The comedy centers on the Gemstones, a family of televangelists. Although patriarch Dr. Eli Gemstone (Goodman) built an empire out of his televangelism and megachurch ministries, he now finds himself and his family at something of a crossroads.

What do you think? Do you like The Righteous Gemstones TV series? Should this HBO TV show be cancelled or renewed for a second season?

*9/9/19 update: HBO has renewed The Righteous Gemstones for a second season.

Where are the good writers nowadays? The garbage they churn out is either cop or medical shows and they are mindless crap. Where are the thoughtful comedies, like Mom, Rescue Me, Taxi, Cheers, Arrested Development, Pushing Daisies, Seinfeld, Golden Girls etc etc. There are a few now, but there is a definite lack of smart funny. Quit dumbing down America. Quit playing into the vapid, shallow,fakeness of unfunny of reality shows and pretend real life. It’s DIGUSTING.