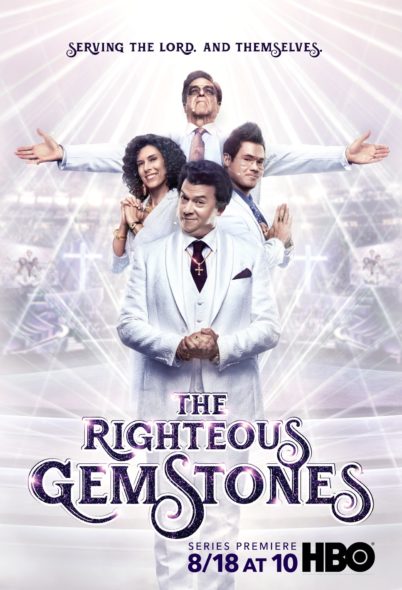 Is the first season of The Righteous Gemstones TV show on HBO heavenly or hellish? As we all know, the Nielsen ratings typically play a big role in determining whether a TV show like The Righteous Gemstones is cancelled or renewed for season two. Unfortunately, most of us do not live in Nielsen households. Because many viewers feel frustration when their viewing habits and opinions aren’t considered, we’d like to offer you the chance to rate all of the The Righteous Gemstones season one episodes here. *Status update below.

An HBO comedy, The Righteous Gemstones stars Danny McBride, John Goodman, Edi Patterson, Adam Devine, Walton Goggins, Cassidy Freeman, Tony Cavalero, Tim Baltz, and Greg Alan Williams. The comedy centers on the Gemstones, a family of televangelists. Although patriarch Dr. Eli Gemstone (Goodman) built an empire out of his televangelism and megachurch ministries, he now finds himself and his family at something of a crossroads.

*9/9/19 update: HBO has renewed The Righteous Gemstones for a second season.

The show is awesome…love the gemstones!

I have not enjoyed a HBO show more since Boardwalk Empire

Please find a way to cancel this like all great shows you have in the past….

First episode last night, a lot to unpack here, maybe too much too soon. Lots of stereotypes, lots of cliches, kind of wish they hadn’t hit us with so much, a little subtlety goes a long way, you know? Show used a well-worn sledge hammer, could have been much better.