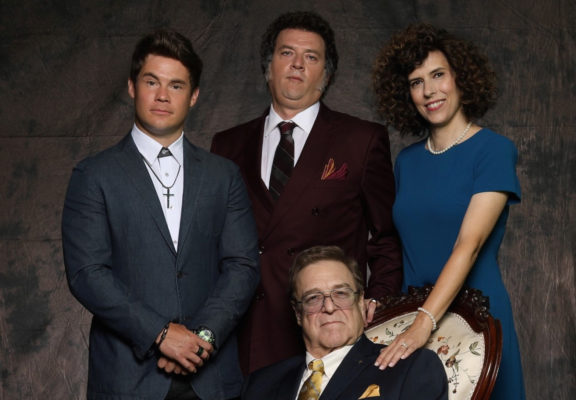 TV show description:
From creator Danny McBride, The Righteous Gemstones TV show is a comedy that follows a family of televangelists. The Gemstones have built an empire out of their televangelism and megachurch ministries, and now they are at something of a crossroads.

Family patriarch Dr. Eli Gemstone (Goodman) and his late wife Aimee-Leigh (Nettles) built their ministry from the ground up. Although everything is different without her, Eli still has Martin Imari (Williams) — his man Friday.

As the eldest son, Jesse (McBride) expects to take the lead, just like his father before him. To that end, he’s sought to bring the ministry into the 21st century. Jesse has some skeletons in his closet though, and they could wind up doing more than just rattling him. He is married to Amber (Freeman), a former journalist.

As the only girl in the family, Judy (Patterson) usually feels left out. She’s the ministry’s secretary and wants to stop being treated as an afterthought. In the meantime, she’s living in sin with fiancé BJ (Baltz) and plotting her next move.

Kelvin (Devine) is the baby of the bunch. Jesse thinks of the young “pseudo-hipster” as less of a blessing and more of a curse.

Since his wife’s passing, Eli has been in crisis mode. He is not sure his adult children are up to the task at hand and knows they’re floundering without their mother.

What do you think? Do you like The Righteous Gemstones TV series? Should this HBO TV show be cancelled or renewed for another season?

The new HBO comedy from Danny McBride feels at once like an extension of the creator s other work for the network and a massive step up. facebook twitter tumblr This Righteous Gemstones review contains spoilers. The Righteous Gemstones Episode 1 Danny McBride has carved out quite the space on HBO for his comedic brand of toxic male entitlement run amok, and that partnership continues with The Righteous Gemstones. Created by McBride but featuring contributions from frequent co-conspirators Jody Hill and David Gordon Green, Gemstones follows Eastbound Down and Vice Principals in exploring loathsome antiheroes that peacock what little power… Read more »

Righteous Gemstones best comedy I’ve seen in years! Not usually a comedy fan…this show makes me laugh.
Love it…can’t wait for season 2! Every character in this show is excellent.