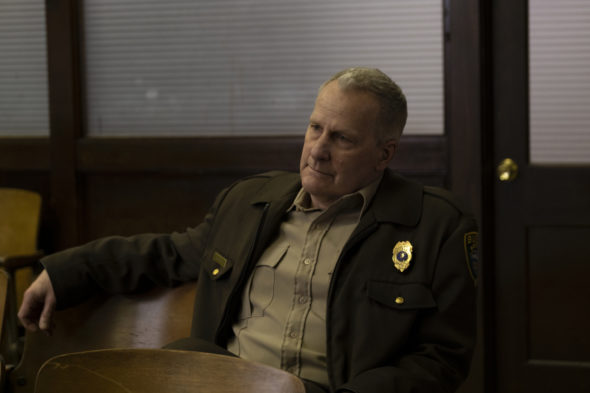 The journey of Del Harris has ended.  The American Rust TV show has been cancelled so there won’t be a second season of the Showtime series

A family drama series, the American Rust TV show is based on the novel by Philipp Meyer and stars Jeff Daniels, Maura Tierney, Bill Camp, David Alvarez, Alex Neustaedter, Julia Mayorga, Mark Pellegrino, and Rob Yang. A story of survival and transcendence, it’s told through the eyes of Del Harris (Daniels). He’s the complicated (and compromised) chief of police of a Pennsylvania Rust Belt town that’s full of good people making bad choices. When news of the murder of an ex-cop rips through the town, Harris must decide what lengths he is willing to take to protect Billy Poe (Neustaedter), the son of Grace (Tierney), the woman he loves.

Airing on Sunday nights, the first season of American Rust averaged a 0.02 rating in the 18-49 demographic and 304,000 viewers in the live+same day ratings (including DVR playback through 3:00 AM). While these numbers don’t include further delayed or streaming viewing, they are a very good indicator of how a show is performing, especially when compared to others on the same channel.

“We can confirm that American Rust will not be moving forward with a second season,” read a Showtime statement to TribLive. “We would like to thank our partners at Boat Rocker, our talented showrunner Dan Futterman and the rest of the wonderful writers, and our amazing cast led by Jeff Daniels and Maura Tierney.”

A reader of this site named “Pete”, who says they worked on payroll for the show in Pittsburgh, commented yesterday that there had been efforts to sell the show to another outlet. TribLive notes that “producers may try to shop the series to other outlets but the odds of salvation seem slim.”

What do you think? Have you enjoyed the American Rust TV show on Showtime? Are you sad to hear that this series won’t have a second season?

Shoot! Please do a season 2!!! I loved the show, you left us with all the cliffhangers!

It is disappointing that the show won’t be returning for a season 2. In that case, why were we left hanging? The ending left us with more questions than answers. It was a fine show with an equally fine cast. It deserves another season.

Oh I’m highly disappointed that it was cancelled and I thought the show was very spellbinding and well made! Did it have bad reviews or ratings????

Does the story line have an ending or should I not bother not watching it?

This was a well written and acted show. There are lots of unresolved issues that should have had at least one more season to see what happens to these people. What a shame. All the good scripted shows get cancelled. I can’t bear another reality show. Keep America Rust please

Anne, I totally agree with you. I really hope they can find another network to continue this show.

I am so sad this ended. I couldnʻt wait for the next season

p.s. Let’s hope and pray the scourge of RUST’s tragic outcome did not influence viewership. Rewind, and regroup. Seriously. Thanks!!!

I’m stunned. As a resident of NWPA and a well traveled Pennsylvanian, I absolutely loved the ambiance, the bleak hopelessness of the landscape evoked by the creators of this series. That, and Jeff Daniels. Just that man, alone, along with so many others, so precisely cast and characterized… Maura Tierney, the fentanyl addicted dad, the seamstress house (mum was a seamstress)……just when we could NOT WAIT for the next episode, no less!!!! These moral dilemma tales are of prime importance; yet ,those whose message of amorality flaunts get prime time. I hope you realize what you are doing to society… Read more »

It was a great show, why is it the good ones only get a one and done, but the crap shows get multi-seasons.

This was a great TV series and was extremely well-acted. With all the other crap on television, its shocking how this series wasn’t continued. This certainly is as good as Billions, which is just about stereotypic American greed amongst our current set of Robber Barons. American Rust captures one of the fundamental problems that has given rise to Trumpian America—a fundamental loss of a sense of fairness for Americans whose skills no longer make them competitive in American society in forgotten areas like Appalachia. I hope some other network has the good sense to pick-up American Rust.

Shot in the dark….is this you, Gary??