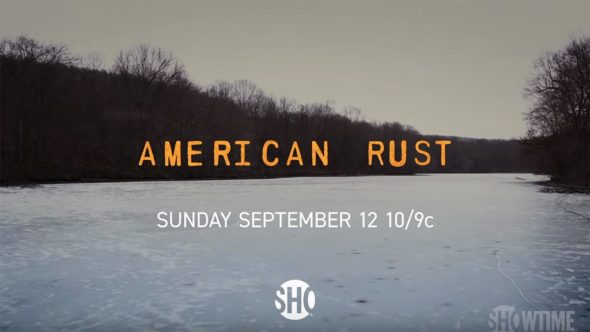 Jeff Daniels has starred in a few TV series over the years but his longest-running show, The Newsroom, lasted just 25 episodes. Will his latest effort be a hit in the ratings and run for many years? Will American Rust be cancelled or renewed for season two? Stay tuned.  *Status Update Below.

A family drama series, the American Rust TV show is based on the novel by Philipp Meyer and stars Daniels, Maura Tierney, Bill Camp, David Alvarez, Alex Neustaedter, Julia Mayorga, Mark Pellegrino, and Rob Yang. A story of survival and transcendence, it’s told through the eyes of Del Harris (Daniels). He’s the complicated (and compromised) chief of police of a Pennsylvania Rust Belt town that’s full of good people making bad choices. When news of the murder of an ex-cop rips through the town, Harris must decide what lengths he is willing to take to protect Billy Poe (Neustaedter), the son of Grace (Tierney), the woman he loves.

What do you think? Do you like the American Rust TV series on Showtime? Should it be cancelled or renewed for a second season?

*1/25/22 update: American Rust has been cancelled on Showtime.

*6/10/22 update: Amazon Freevee has saved the series and renewed it for a second season.

Bring it back, I want to see what happens. It was well acted and produced

Many questions at the end of 1st season, I hope there’s a second one !! I loved the series, Jeff Daniel & Maura T as well as the other actors, were great

Please renew! I need to know what happened!

Please renew! I think once people catch on it will be a big hit. I watched the entire season in one day-I want more!