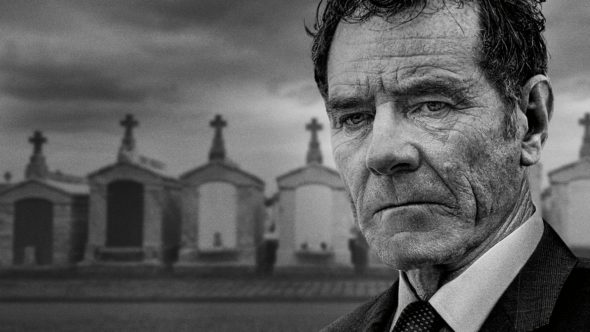 It appears that we don’t have to wonder if Your Honor will be cancelled or renewed for a second season since it looks to be a true mini-series with a planned ending. Still, if the Showtime series does well enough, could it return in some form? Stay tuned.  *Status update below.

A legal thriller, the Your Honor TV series stars Bryan Cranston, Hunter Doohan, Michael Stuhlbarg, Hope Davis, Carmen Ejogo, Isiah Whitlock Jr., and Sofia Black-D’Elia, with guests Maura Tierney, Amy Landecker, Margo Martindale, Lorraine Toussaint, Chet Hanks, Lamar Johnson, and Lilli Kay. Michael Desiato (Cranston) is a highly-respected New Orleans judge whose personal and professional lives are turned upside down when his teenage son, Adam (Doohan), is involved in a hit-and-run. This leads to a high-stakes game of lies, deceit, and impossible choices for both of them. Meanwhile, Jimmy Baxter (Stuhlbarg) is the much-feared head of a crime family and the husband of Gina (Davis), who might be even more dangerous than her husband.

What do you think? Do you like the Your Honor TV series on Showtime? Should it be cancelled or renewed for a second season?

Yes, it differently needs a second series. There is still plenty of room to expand the characters.

Please please please! We need more. This was the best series I have watched in a very long time. We need a season 2,3 and 4

There has to be more to Your Honor. There were witnesses to the motorcycle accident– the black SUV that was chasing Adam is seen turning around and driving off after he hits Rocco. What’s the back story on Mrs. Desiato’s murder? Why was Adam’s memorisl to his Mom destroyed? Who was pursuing Adam and why? There’s enough backstory to keep unfolding with the original characters for at least another season or more. Plus what lies ahead for Desisto, as his life spirals out of control with not only the loss of his wife, but now his son and reputation? Do… Read more »

The show was excellent and does need to continue. I can definitely see an entry into season two, just they can as well.
Can’t wait

I loved every minute of the show. I could watch it over and over again. I had all my co workers watch it , then we would talk about it at work. I was on the edge of my seat every episode.

Please renew Your Honor!!! The acting and story lines are terrific!
So many questions left unanswered by this season’s episodes!

Being a one-season show, which will obviously not be returning to tie up the scores of lose ends that were so generously left for us, that may very well have been the worst series finale I’ve ever seen. I saw The Sopranos finale. Need I say more? What a disappointment; to slowly, and at times extremely stressfully, build up to this huge climax and them boom—cut to black. So many questions left unanswered. So many relationships left unresolved. Other than that—the first nine episodes—great show. However, IF Showtime were to decide to bring it back for another season, everything I… Read more »

Hi please renew for another season of your honor! Great show!! Great acting too!! Our family enjoyed this

I’m not one to watch series that have to do with law and order, but this serieswas worth investng my time and my comments wih my friends and family. How can you rob us from that. Please have a second and third and more seasons.

Renew! So much story left to tell