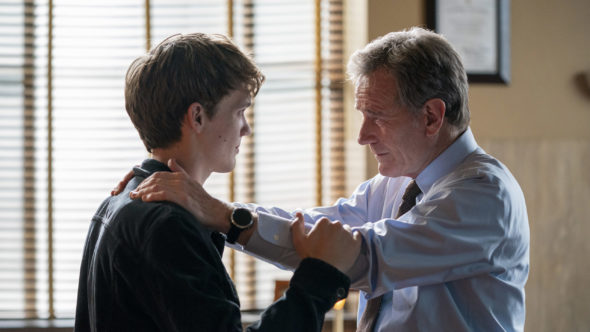 Your Honor will return for a second season, but that will end the drama. Bryan Cranston revealed that the series would end during an interview on Dax Shepherd’s Armchair Expert podcast. Originally planned as a limited series, the cable channel renewed the series for a second season. Production has just begun on season two.

Also starring Hunter Doohan, Michael Stuhlbarg, Hope Davis, Carmen Ejogo, Isiah Whitlock Jr., and Sofia Black-D’Elia, the first season of the drama series follows a New Orleans judge (Cranston) who twists the law after his son is involved in a hit and run.

Cranston said the following about the Showtime series, per TV Line:

“I am [currently] preparing for the second and last season of Your Honor, which is a limited series that I did for Showtime. As they tell me, it got higher ratings than any other series they’ve ever had — and so, one more season of that.”

What do you think? Are you a fan of Your Honor on Showtime? Do you plan to watch season two?

Iam fan of the series.

SO LOOKING FORWARD TO SEASON 2 OF YOUR HONOR!

Very excited about a 2nd season of “Your Honor”! Definitely the edgiest, most intense thing Bryan Cranston has done since “Breaking Bad”. Really looking forward to seeing how the relationship between the judge and the mob boss continues to unfold, if the writers decide to explore this story line. Just wish we didn’t have to wait so long between seasons.

I’m so excited, something to look forward to. I loved the series.

So I’m guessing this means they’re taking another season to resolve some of the plot holes left at the end of the first season, rather than starting a new storyline.

I don’t see how they could take it into a third season no matter how good the ratings are though… at least not without a completely different story, with a mostly new cast that ends up in a trial with Cranston’s character as the judge. You could get several seasons in an “anthology” style that way (i.e. “Fargo”, “The Sinner”, etc. )

It was so over the top unrealistic I’m not sure I can go with it again. In spite of being a huge Bryan Cranston fan.

I loved the first season of Your Honor. It kept you on the edge of your seat. So good. I hate this is the last season!! But yes I plan on watching it!!!

Your Honor that was miniseries so good. Thought was over no more. But I can’t wait to see new episodes new season whenever comes out.