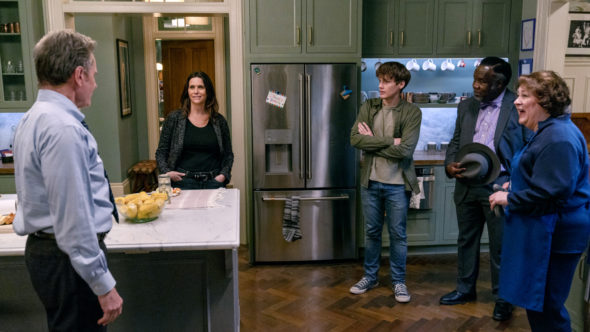 Your Honor fans are getting a late Christmas gift. The fifth episode of the series will be available on the Showtime mobile app and on-demand tomorrow. The episode will still air on the Showtime cable channel on Sunday night.

Showtime revealed more about the decision to release the fifth episode of Your Honor early in a press release:

“SHOWTIME has announced that the fifth installment of YOUR HONOR, starring Oscar nominee and Emmy, Golden Globe(R), Screen Actors Guild(R) and Tony(R) Award winner Bryan Cranston (Breaking Bad), will release early for streaming and on-demand viewing on Thursday, December 31. Directed by Emmy nominee Clark Johnson (The Shield), the episode of the hit limited series will be available to stream on SHOWTIME and across all SHOWTIME partner platforms ahead of its linear premiere on Sunday, January 3 at 10 PM ET/PT.

The top limited drama series premiere ever on SHOWTIME, YOUR HONOR is a 10-episode legal thriller starring Cranston as Michael Desiato, a respected New Orleans judge whose teenage son, Adam (Hunter Doohan), is involved in a hit-and-run that leads to a high-stakes game of lies, deceit and impossible choices. SAG Award winner Michael Stuhlbarg (Call Me By Your Name) stars as Jimmy Baxter, the much-feared head of a crime family opposite Emmy and Golden Globe(R) nominee Hope Davis (For the People) as his wife, Gina, who might be even more dangerous than her husband. The series also stars Carmen Ejogo (Selma), Isiah Whitlock Jr. (The Wire), and Sofia Black-D’Elia (The Night Of). Additional guest stars include Maura Tierney (THE AFFAIR), Amy Landecker (Transparent), Emmy winner Margo Martindale (The Americans), Lorraine Toussaint (Orange Is the New Black), Blair Underwood (Dear White People), Chet Hanks (Empire), Lamar Johnson (The Hate You Give) and Lilli Kay (Chambers).

What do you think? Are you a fan of Your Honor? Will you watch the new episode before it airs on Showtime?

Don’t think so limited series miniseries going to ending few weeks unfortunately even though great show will be surprised if continue highly doubt it.

I hope season 2 comes out soon!!

Thrilled news going to be early this week instead of Sunday that’s awesome to hear. Love this show so good.