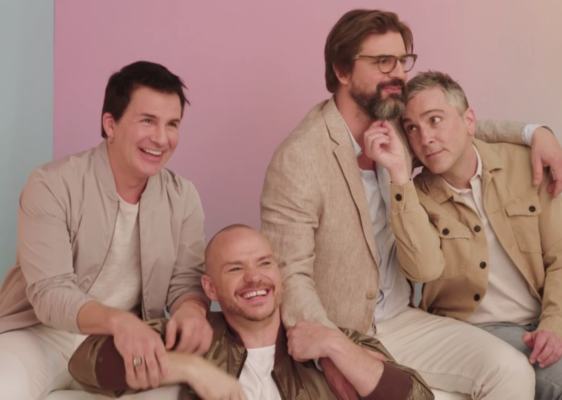 Are you a fan of Queer as Folk? Recently, the cast reunited and spoke with Entertainment Weekly about the groundbreaking Showtime TV show.

Based on the UK series of the same name, the drama follows the lives of a group of young gay men and women living in the Philadelphia area. The Showtime series ran for five seasons before ending in 2005 and starred Gale Harold, Randy Harrison, Hal Sparks, Scott Lowell, Peter Paige, Sharon Gless, Thea Gill, Michelle Clunie, Robert Gant, Jack Wetherall, and Sherry Miller.

For the first time in nearly 15 years, the cast of Queer as Folk got together to discuss the impact of the Showtime drama, which looked at the lives of gay men and women with an honesty rarely seen on television at the time.

During the interview, star Hal Sparks said he credits the series for moving society forward:

You can see a lot of seeds, I think, in a lot of the movements in society going forward. Not to put too fine a point on it, but I think some of those came directly from this show’s existence.”

See more from the interview below:

What do you think? Did you watch Queer as Folk? Would you watch a revival?

I would definitely watch it. I miss the show. Loved everyone on it. Please bring it back with the original people. And, I’m not even gay, but I think it helped gay youth.

I would love to see the story line continue!
I’m so wishing they would go on..
Bring them back please!

I loved QAF & would definitely watch it, esp the Brian/ Justin storyline. Or even a movie version with them all now. 5 seasons was too short!!

Definitely would watch the revival. Great show, everyday life from a different prospective!

Loved the show wish they would bring it back

I love this show. Please make a revival!!!! This brings me so much life, and It leaves me wanting to watch this for the rest of my life lmao. I love michael and emmet and Brian ! Please make another!!!!!

******* love ittttt!!!! Make a revival pllllzzzzzzz. I’m so shooketh. My fav characters are Brian and Michael. Justin is agg but the whole show is amazing!!!!!!

I watched the show and LOVED it ! My favorite characters were Emmett and Brian

I watched the show and could relate with it. I loved everyone involved in the show. I would love to see it come back and would definitely watch it.

I agree, this was a really good show. Not one for remakes, but I’d certainly watch it.

I watched QaF and would watch if it came back on.

I loved the series ***** as Folk. It was groundbreaking and heartbreaking with laughter and reality.