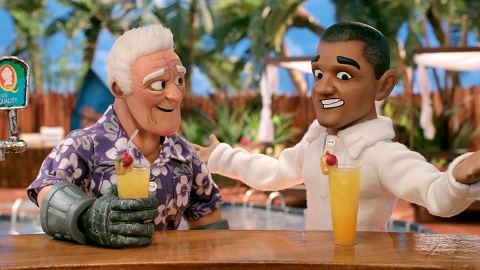 SuperMansion is back and ready for summer. This week, Crackle announced the TV show’s upcoming Summer Vacation Special will premiere in August.

The special will see the team head “to Hawaii where Titanium Rex (Bryan Cranston) runs into a vacationing former President Barack Obama (Jay Pharoah), Black Saturn (Tucker Gilmore) and Lex (Jillian Bell) teach Cooch (Heidi Gardner) how to swim, and American Ranger (Keegan-Michael Key) attempts to perform in a USO show while an evil threat brews under the sea.”

The network also released a first-look photo from the new special and announced its participation at the international television festival, SeriesFest, on Saturday, June 23 with a world premiere screening followed by a Q&A.

Additionally, a new episode of “SuperMansion” is available today, Monday, June 11. In episode 306, “The Long Chaun,” the League of Freedom travels to the Godsrealm to save former member Zenith (Yvette Nicole Brown) from her evil Uncle Ridan (Taran Killam). Robobot (Zeb Wells) learns what it means to be a real boy as Titanium Rex (Bryan Cranston) must prove to be a hero true in order to wield the Sword of Azimuth.

“SuperMansion” is created by Zeb Wells and Matthew Senreich (“Robot Chicken”), who also act as executive producers under their production company Stoopid Buddy Stoodios alongside Seth Green, John Harvatine IV, Eric Towner and Tom Root. Bryan Cranston and James Degus also serve as executive producers under their production banner Moonshot Entertainment. The series is directed by Nick Simotas (“Back at the Barnyard”) and distributed by Sony Pictures Television Inc.

What do you think? Are you a fan of SuperMansion? Will you watch the summer special?