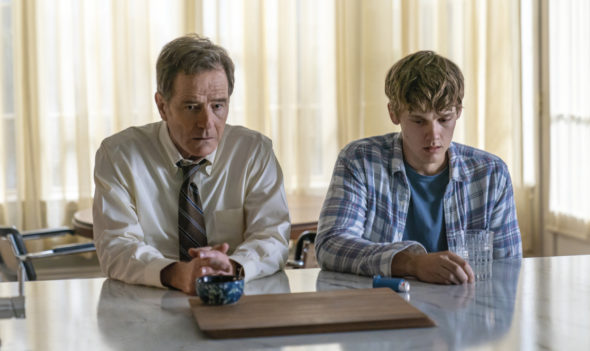 Who will survive? Has the Your Honor TV show been cancelled or renewed for a second season on Showtime? The television vulture is watching all the latest cancellation and renewal news, so this page is the place to track the status of Your Honor, season two. Bookmark it, or subscribe for the latest updates. Remember, the television vulture is watching your shows. Are you?

Airing on the Showtime cable channel, the Your Honor TV series stars Bryan Cranston, Hunter Doohan, Michael Stuhlbarg, Hope Davis, Carmen Ejogo, Isiah Whitlock Jr., and Sofia Black-D’Elia, with guests Maura Tierney, Amy Landecker, Margo Martindale, Lorraine Toussaint, Chet Hanks, Lamar Johnson, and Lilli Kay. Michael Desiato (Cranston) is a highly-respected New Orleans judge whose personal and professional lives are turned upside down when his teenage son, Adam (Doohan), is involved in a hit-and-run. This leads to a high-stakes game of lies, deceit, and impossible choices for both of them. Meanwhile, Jimmy Baxter (Stuhlbarg) is the much-feared head of a crime family and the husband of Gina (Davis), who might be even more dangerous than her husband.

The first season of Your Honor averaged a 0.08 rating in the 18-49 demographic and 591,000  viewers. Find out how Your Honor stacks up against other Showtime TV shows.

Will Showtime cancel or renew Your Honor for season two? It appears that this is a close-ended mini-series so a renewal isn’t expected. Still, if a show is popular enough, sometimes it can be continued anyway. I’ll update this page with breaking developments. Subscribe for free alerts on Your Honor cancellation or renewal news.

8/24/2021 update: Showtime has revived Your Honor and renewed it for a second season.

What do you think? Are you glad that the Your Honor TV show has been renewed for a second season on Showtime?

I love your honor enjoyed every show I hope it comes back, really kept me interested. I loved breaking bad he was a bad a.. actor.

Loved your honour love that actor he was in breaking bad

Please bring it back . Season 2

Your Honor is the BEST show on any channel and I would be so disappointed if it is not back for a second season. Please keep it going. Bryan Cranston is a brilliant actor!

Oh my yes there has to be a second season and more your honor was great! Could not stop watching!

…after braking bad this is great show…

I watched in one day 1 season,its a great,great Brian Cranston and all actors 10/10. I wait season 2.

Seriously , Showtime you get me hooked on this show and Now you want to cancel it ! why why do you all do this all the time. hopefully Amazon picks it up you don’t know what you’re missing out on and you don’t know what big mistake you’re going to do by letting go of this series!! Big mistake.

Seriously can they not tell how great this show is ? Seasons,, not one but many need to be added !