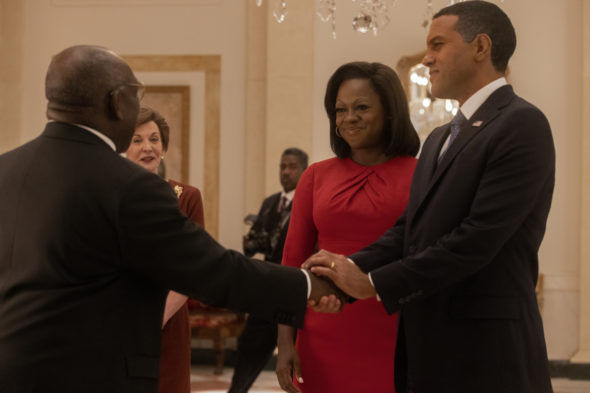 How much do we really know about these historical figures? Has The First Lady TV show been cancelled or renewed for a second season on Showtime? The television vulture is watching all the latest cancellation and renewal news, so this page is the place to track the status of The First Lady, season two. Bookmark it, or subscribe for the latest updates. Remember, the television vulture is watching your shows. Are you?

Airing on the Showtime cable channel, The First Lady TV show stars Viola Davis, Michelle Pfeiffer, Gillian Anderson, O. T. Fagbenle, Dakota Fanning, Lily Rabe, Regina Taylor, Kiefer Sutherland, and Aaron Eckhart. The series tells the story of American leadership, as told through the lens of the women at the heart of the White House. In the government’s East Wing, many of history’s most impactful and world-changing decisions have been hidden from view, made by America’s charismatic, complex and dynamic First Ladies. The first season tells the stories of former first ladies Michelle Obama (Davis), Betty Ford (Pfeiffer), and Eleanor Roosevelt (Anderson).

The first season of The First Lady averaged a 0.02 rating in the 18-49 demographic and 229,000 viewers in the live+same day ratings (including DVR playback through 3:00 AM). While these numbers don’t include further delayed or streaming viewing, they are a very good indicator of how a show is performing, especially when compared to others on the same channel. There can be other economic factors involved in a show’s fate, but typically the higher-rated series are renewed and the lower-rated ones are cancelled. Find out how The First Lady stacks up against other Showtime TV shows.

Will Showtime cancel or renew The First Lady for season two? This is an anthology series so the first season will have an ending but the show could return for another year and focus on other Presidents’ wives. With a format like this, Showtime can attract big-name actors to play well-known historical figures and not require multiple-season commitments. Despite middling ratings, the series seems tailor-made for a pay-for-view cable channel so I think there’s a strong chance that it will be renewed. I’ll update this page with breaking developments. Subscribe for free alerts on The First Lady cancellation or renewal news.

What do you think? Do you hope that The First Lady TV show will be renewed for a second season? How would you feel if Showtime cancelled this TV series, instead?

I enjoyed this and learned so much. Please bring it back with season 2

I really enjoyed the series. It was very interesting and I vote to continue the series.

The first lady is smart and riveting , the actors were so incredible. I Learned ,i cried, i was angry i was happy so many emotions. These are tough times we live in now ,but the world has progressed we just need to progress alot more .