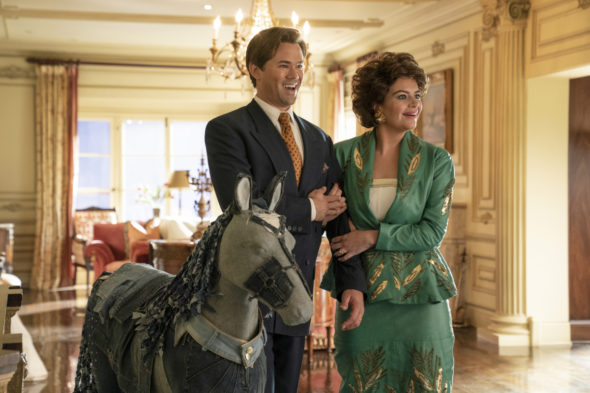 Will this band of outsiders become the insiders that they replaced? Has the Black Monday TV show been cancelled or renewed for a third season on Showtime? The television vulture is watching all the latest cancellation and renewal news, so this page is the place to track the status of Black Monday, season three. Bookmark it, or subscribe for the latest updates. Remember, the television vulture is watching your shows. Are you?

The second season of Black Monday averaged a 0.02 rating in the 18-49 demographic and 113,000 viewers. Compared to season one, that’s down by 71% in the demo and down by 61% in viewership. Find out how Black Monday stacks up against other Showtime TV shows.

Will Showtime cancel or renew Black Monday for season three? The ratings are much, much lower than last season but, given world events, viewers may be a bit distracted. In the end, Showtime doesn’t have to please advertisers, the channel just needs to give subscribers programming they like and can’t get elsewhere. With a cast like this, I lean toward a renewal but the incredibly low numbers are giving me pause. I’ll update this page with breaking developments. Subscribe for free alerts on Black Monday cancellation or renewal news.

10/16/20 update: Black Monday has been renewed for a third season on Showtime.

What do you think? Are you glad that the Black Monday TV show has been renewed for a third season? How would you feel if Showtime had cancelled this TV series, instead?

Terribly bad show with lots of totally unnecessary nude ***** scenes. Season two’s low viewership showed one thing, people don’t want to see the objectification of the male body as well as the female body. BTW: I don’t understand one. Today’s shows show naked penises one by one, but when it comes to naked vulvas, no, never shown, it remains taboo. Nice hypocrisy.

You’re watching cable or satellite right? What do you expect? No when you’re watching Showtime you’re going to get all sorts of explicit scenes. You know that you’ve been watching showtime i’ve seen all these it’s just you’re biased towards it. the show is good if you understand the genre is probably better for you to understand otherwise she was not for you.

Please, please renew!!! The hubs and I just binge watched both seasons and want more! The cast is phenomenal!

1
0
Reply
You Heard It Here First

Black Monday is one of the funniest shows since The Office. They would be stupid not to renew it

What are the better showtime productions.

0
0
Reply
You Heard It Here First
Reply to  Just

There aren’t any. Black Monday is the best

This is a classic! I literally laugh my ass off! The whole cast does a GREAT JOB! I hope they hurry up and continue with season 2 damn covid19 ! I been waiting for Sunday’s to watch it but nothing yet! I don’t understand if they have already completed shooting season 2 why can’t they show it!
I love BLACK MONDAY! Please bring back season 34567910!
Thanks

Second season a lot funnier than the first. Hope it gets renewed.