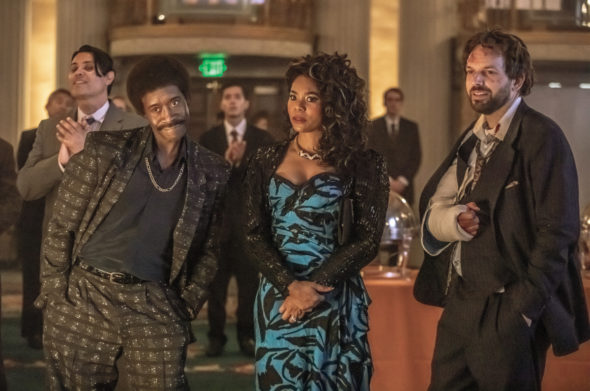 TV show description:
From creators and showrunners David Chase and Jordan Cahan, the Black Monday TV show is a historical comedy series. The story centers on the stock market crash of October 19, 1987. Black Monday, as it is called, was the worst crash in the history of Wall Street.

The action unfolds at the Jammer Group, a shabby little firm lead by Maurice “Mo” Monroe (Cheadle). Mo’s team of traders includes the practical, no-nonsense Dawn (Hall), the compliant Keith (Scheer), Wayne (Sanz) the wild man, and Yassir (Lester), who is not lacking in self-confidence, and into this lion’s den walks the new kid on the block — Blair Pfaff (Rannells).

Together, this motley crew takes on the movers and shakers of the New York City financial world. In this time of excess, no Lamborghini, glass ceiling, or financial system is safe from the Jammer Group.

Series Finale:
Episode #30 — One!
New Year’s Eve 1989. It’s Mo’s “wedding day,” but priority number one is to make sure he and his crew live to see another decade. He and Dawn, Blair, Keith, and Yassir work together to do whatever it takes to make sure that happens. Season finale.
First aired: TBD

What do you think? Do you like the Black Mondays TV series? Should this Showtime TV show be cancelled or renewed for another season?