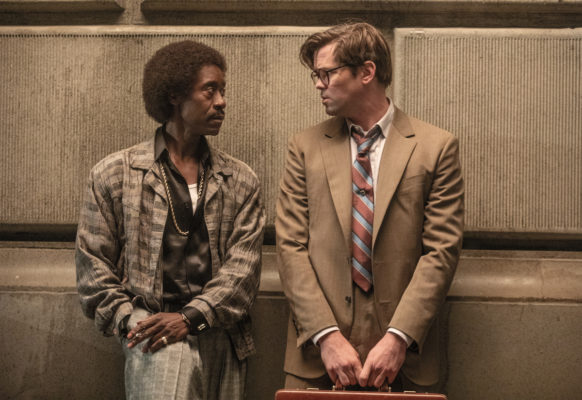 Is the Jammer Group still in the black? Has the Black Monday TV show been cancelled or renewed for a second season on Showtime? The television vulture is watching all the latest cancellation and renewal news, so this page is the place to track the status of Black Monday, season two. Bookmark it, or subscribe for the latest updates. Remember, the television vulture is watching your shows. Are you?

The first season of Black Monday on Showtime averaged a 0.08 rating in the 18-49 demographic and 292,000 viewers. Learn how Black Monday stacks up against the other Showtime TV shows.

Will Showtime cancel or renew Black Monday for season two? The ratings are pretty good and very consistent so, I think it will be renewed for another year. I’ll update this page with breaking developments. Subscribe for free Black Monday cancellation and renewal alerts.

4/29/19 update: Showtime has renewed Black Monday for a second season.

What do you think? Are you glad that the Black Monday TV show has been renewed for season two? How would you feel if Showtime had cancelled this TV series, instead?

It is indeed a great show and yes it was intended to be a mini-series, but many shows have planned on being a single season and ended up expanding into multiple seasons. Black Monday could bring in some new characters, expand on the 80’s wall street vibe post crash and really give it a unique perspective. What people do at there lowest is usually the funniest. Many movies have been made about Wall Street but not many shows. Give it another season!

Black Monday season 2 or bye bye showtime i love this show this show gives something to look forward to on sunday before work on monday!!

BLACK MONDAY IS ONE OF THE BEST SHOWS ON SHOWTIME..JUST CANCELLED MY SUBSCRIPTION..WILL RENEW WHEN SEASON 2 AIRS.

THIS WAS ONE OF THE BEST SHOWTIME SERIES…I JUST CANCELLED MY SUBSCRIPTION..WILL RENEW WHEN BLACK MONDAY SEASON 2 AIRS….

Not a very good show. Loved the Don Cheadle character but the rest of the cast was mediocre

It’s a really good program if you haven’t seen it watch it.

Absolutely awesome show. TV needs more shows like this. I dont think they were originally planning on the show spanning multiple seasons but they definately should, it could easily be done. It’s a must watch.

If you have comcast on demand you can watch the new episodes sunday morning instead of waiting. Amazing show but now that I watched the finale I cannot really see where they could do another. I hope i’m wrong but it pretty much gets wrapped up with not a lot of room to continue.

I agree. It was more like a mini-series. I imagine the writers could come up with a season 2 if they wanted to. Like what happens after Black Monday to the characters. Overall it was an entertaining show but not great. House Of Lies is a better Don Cheadle series in my opinion and I like the characters better.