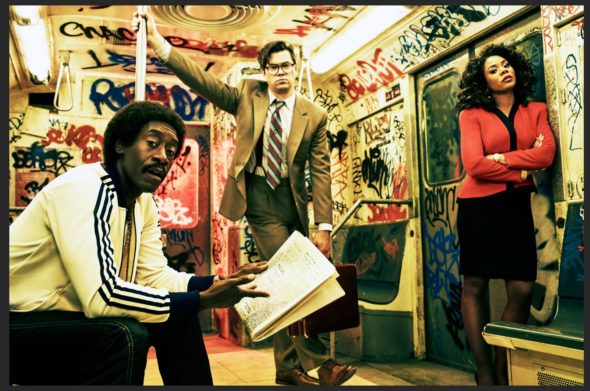 Black Monday just wrapped its first season, but will there be a second? Recently, co-creator David Caspe spoke with The Hollywood Reporter about the future of the Showtime TV show.

In the interview, Caspe said they’re still waiting to hear if Showtime will renew Black Monday or not:

We don’t, we’re just waiting, hopefully. It seems like we got some great critical response, and the fans who have found the show seem to really love it, and watching on Twitter it seems like there’s quite a few people who are into it and are wondering why nobody’s watching or has heard of it. So hopefully if we were to get another season, people would start to hear about it. A lot of times if you don’t break out right away in a crazy way, it’s between seasons one and two that people find stuff. The show is obviously written as incredibly serialized, and I think in some ways getting to watch a few in a row might be helpful for a viewer. In terms of twists and turns throughout the year, it’s definitely built to be binged.”

What do you think? Have you seen Black Monday? Do you want a second season?

I Really enjoyed the show. I would love to see a second season. I think the show was well writtenand funny.

I want to see how Mo comes back from the Honda!

yes i do! but not sure what the storyline would be. Maybe your demographic is all off – it’s for slightly older audience that was in their 20’s in the 80s… that knew about the market crash. I loved all the 80’s references. All the cast had chemistry and they were manic, nuts and brilliant. Kudos to the writers. I would watch another Season!

Put it on Netflix and ppl will definitely start watching it! Especially since it’s something that happened in real life and most were born in the 80s would Plby like to know .

Give us a season 2

Love it! Renew it!