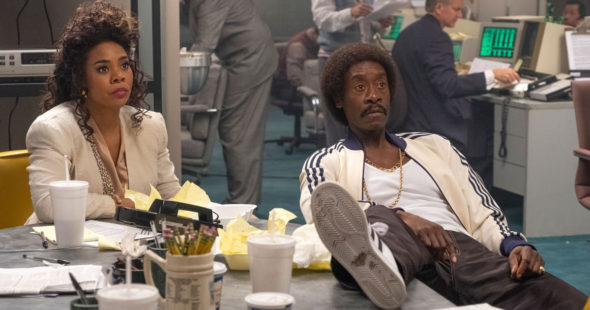 Showtime is invested in Black Monday. The network just announced they’ve renewed the TV show for a second season.

Although Black Monday hasn’t received the highest ratings, the show has garnered some critical buzz. The show’s first season averaged a .08 rating in the 18-49 demo and 292,000 viewers. Showtime has ordered 10 episodes for season two, which is slated to premiere in 2020.

NEW YORK – April 29, 2019 – SHOWTIME announced today that it has picked up a second season of its series BLACK MONDAY. The comedy about a motley crew of underdogs causing the worst stock market crash in the history of Wall Street stars and is executive produced by Emmy® nominee and Golden Globe® winner Don Cheadle. Two-time Tony® Award nominee and Grammy® winner Andrew Rannells (Girls) and Regina Hall (Girls Trip) star in and produce the series.  BLACK MONDAY is created by showrunners and executive producers David Caspe (Happy Endings) and Jordan Cahan (My Best Friend’s Girl). Emmy® nominees Seth Rogen and Evan Goldberg (Preacher, Superbad, Future Man) serve as executive producers. BLACK MONDAY will resume production on 10 episodes later this year for a 2020 debut on the network.

“BLACK MONDAY mines big comedy from the greed, the style, the music, and the excess of the ’80s, but it’s also sneaky smart in its social commentary about that era – and indirectly, our current era as well,” said Gary Levine, President of Entertainment, Showtime Networks Inc. “We can’t wait to see what inspired depravity David and Jordan will cook up in season two.”

A co-production between SHOWTIME and Sony Pictures Television, BLACK MONDAY takes viewers back to October 19, 1987 – aka Black Monday. To this day, no one knows who “caused it” … until now. It’s the fictional story of how a group of outsiders took on the blue-blood, old-boys club of Wall Street and ended up crashing the world’s largest financial system, a Lamborghini limousine and the glass ceiling.”

What do you think? Have you seen Black Monday? Will you watch season two?