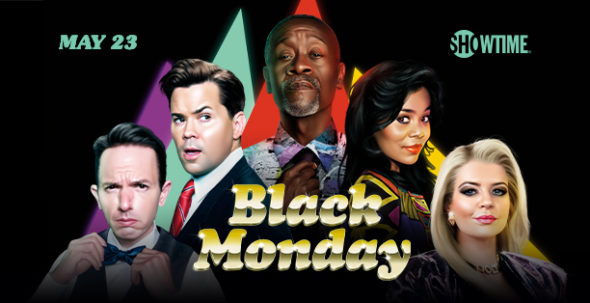 How long will the luck of this show about a group of underdogs hold up? The Black Monday TV series has typically drawn low ratings on Showtime but has stayed on the air, likely because of the stellar cast. Will the ratings rise or fall this time around? Will Black Monday be cancelled or renewed for season four? Stay tuned.  *Status Update Below.

A dark comedy series, Black Monday stars Don Cheadle, Regina Hall, Paul Scheer, Andrew Rannells, Casey Wilson, and Yassir Lester. The story began with Maurice “Mo” Monroe (Cheadle) and his group of outsiders taking on the old-boys club of 1987 Wall Street, ultimately leading to the largest stock market crash in history. Season two followed Dawn (Hall) and Blair (Rannells) as they took over the TBD Group, while Mo (Cheadle) and Keith (Scheer) fled to Miami. At the end of season two, Dawn took the hit for Black Monday, and Mo reigned supreme as head of the newly minted The Mo Co. Season three tells the story of what lies in store for him, his band of underdogs, and his enemies.

For comparisons: Season two of Black Monday on Showtime averaged a 0.02 rating in the 18-49 demographic and 113,000 viewers.

What do you think? Do you like the Black Monday TV series on Showtime? Should it be cancelled or renewed for a fourth season?

Today is now
Reply to  Vitaly

You really have to understand the genre of this TV show. Otherwise you’re gonna think it’s nothing. you’re a comic book fan not for you.The show is pretty good for the genre some of it’s made up it’s one of the best you can watch the lead actors awesome