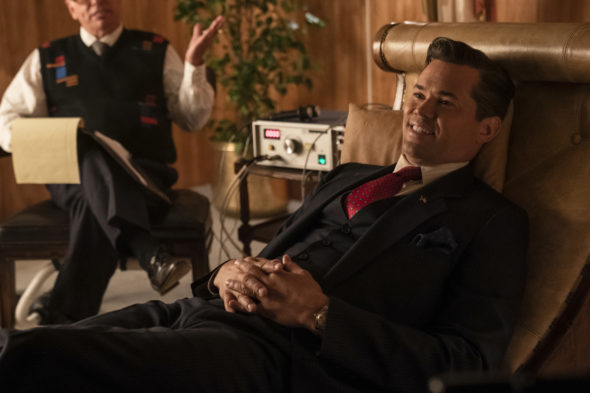 What will become of these underdogs in the third season of the Black Monday TV show on Showtime? As we all know, the Nielsen ratings typically play a big role in determining whether a TV show like Black Monday is cancelled or renewed for season four. Unfortunately, most of us do not live in Nielsen households. Because many viewers feel frustrated when their viewing habits and opinions aren’t considered, we invite you to rate all of the third season episodes of Black Monday here.  *Status Update Below.

A Showtime dark comedy series, Black Monday stars Don Cheadle, Regina Hall, Paul Scheer, Andrew Rannells, Casey Wilson, and Yassir Lester. The story began with Maurice “Mo” Monroe (Cheadle) and his group of outsiders taking on the old-boys club of 1987 Wall Street, ultimately leading to the largest stock market crash in history. Season two followed Dawn (Hall) and Blair (Rannells) as they took over the TBD Group, while Mo (Cheadle) and Keith (Scheer) fled to Miami. At the end of season two, Dawn took the hit for Black Monday, and Mo reigned supreme as head of the newly minted The Mo Co. Season three tells the story of what lies in store for him, his band of underdogs, and his enemies.

What do you think? Which season three episodes of the Black Monday TV series do you rate as wonderful, terrible, or somewhere between? Do you think that Black Monday should be cancelled or renewed for a fourth season on Showtime? Don’t forget to vote, and share your thoughts, below.