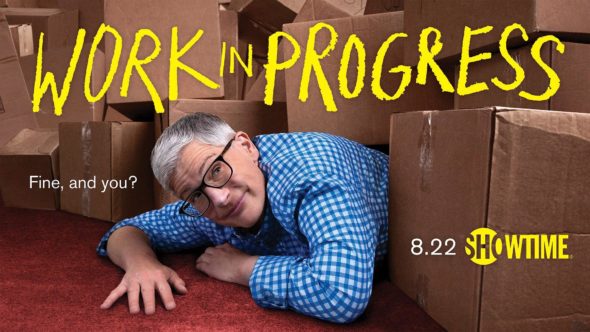 The first season of the Work In Progress TV show drew pretty small ratings but the single-camera comedy was renewed by Showtime anyway. Will interest grow this time around? Will Work In Progress be cancelled or renewed for season three? Stay tuned.  *Status Update Below.

Work in Progress stars Abby McEnany, Celeste Pechous, Armand Fields, Karin Anglin, Bruce Jarchow, Theo Germaine, and Julia Sweeney. Abby McEnany (as a fictionalized version of herself) is a 45-year-old self-identified fat, queer dyke whose misfortune and despair unexpectedly led her to a vibrantly transformative relationship. A finely crafted cocktail of depression, OCD, queerness, and anxiety, Abby’s life is in a quiet and perpetual crisis, despite her ability to charm those around her with her self-deprecating and endearing personality. When her confident, suburban sister Alison (Anglin) determinedly sets her up with Chris (Germaine), a younger, sexually explorative trans man, things start to radically shift in Abby’s mind in terms of her self-identity and self-worth. This allows her to rethink her choices and even confront actress Julia Sweeney (Sweeney), the woman who “ruined her life”. With the help of her acerbic best friend, Campbell (Pechous), Abby attempts to navigate her way through modern-day dating, therapy mishaps, rude co-workers, and more. Season two picks up with Abby in the wake of her breakup (and almost out of almonds). Abby begrudgingly accepts that she’s too busy to kill herself. In fact, she’s just starting to get her head above water… when a global pandemic converges with a family emergency and forces her into uncharted territory.

For comparisons: Season one of Work In Progress on Showtime averaged a 0.02 rating in the 18-49 demographic and 101,000 viewers in the live+same day ratings.

What do you think? Do you like the Work In Progress TV series on Showtime? Should it be cancelled or renewed for a third season?

*1/25/22 update: Work in Progress has been cancelled by Showtime.