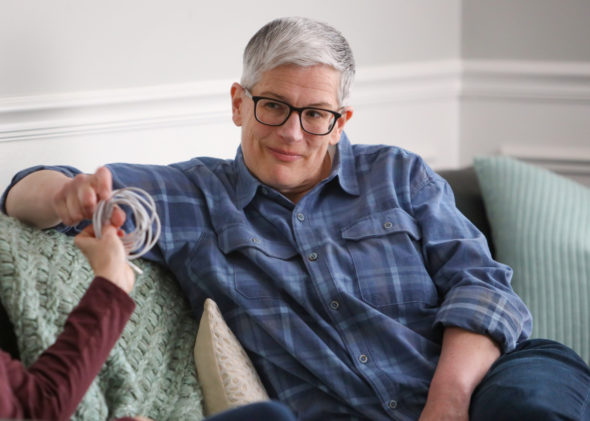 Abby’s troubles are over. Showtime has quietly cancelled the Work In Progress TV series so, the low-rated comedy won’t be back for a third season.

A single-camera comedy, Work in Progress stars Abby McEnany, Celeste Pechous, Armand Fields, Karin Anglin, Bruce Jarchow, Theo Germaine, and Julia Sweeney. Abby McEnany (as a fictionalized version of herself) is a 45-year-old self-identified fat, queer dyke whose misfortune and despair unexpectedly led her to a vibrantly transformative relationship. A finely crafted cocktail of depression, OCD, queerness, and anxiety, Abby’s life is in a quiet and perpetual crisis, despite her ability to charm those around her with her self-deprecating and endearing personality. When her confident, suburban sister Alison (Anglin) determinedly sets her up with Chris (Germaine), a younger, sexually explorative trans man, things start to radically shift in Abby’s mind in terms of her self-identity and self-worth. This allows her to rethink her choices and even confront actress Julia Sweeney (Sweeney), the woman who “ruined her life”. With the help of her acerbic best friend, Campbell (Pechous), Abby attempts to navigate her way through modern-day dating, therapy mishaps, rude co-workers, and more. Season two picks up with Abby in the wake of her breakup (and almost out of almonds). Abby begrudgingly accepts that she’s too busy to kill herself. In fact, she’s just starting to get her head above water… when a global pandemic converges with a family emergency and forces her into uncharted territory.

Airing on Sunday nights, the second season of Work In Progress averaged a 0.01 rating in the 18-49 demographic and 59,000 viewers in the live+same day ratings (includes all DVR playback through 3:00 AM). Compared to season one, that’s down by 75% in the demo and down by 42% in viewership in the live+same day ratings (including DVR playback through 3:00 AM). While these numbers don’t include further delayed or streaming viewing, they are a very good indicator of how a show is performing, especially when compared to others on the same channel.  The series was one of Showtime’s lowest-rated shows.

Season two aired from August until October of last year. The show’s Twitter account was subsequently deactivated.  Pechous noted that the series had been cancelled back in December after Time named Work In Progress one of the year’s best shows.

Beyond proud. Ecstatic to be a part of this story. No season 3. But we’re all a work in progress… so just the beginning. https://t.co/NlKCPvxzXk

SpoilerTV was the first to notice the cancellation Tweet.

What do you think? Have you enjoyed the Work In Progress TV show on Showtime? Are you sorry to hear that it won’t have a third season?

I truly loved this show. It was so different from the boring shows on TV.

How depressing, I really liked this series, it was different and really funny

There was great humor in this show. It’s torture that they’re not picking up because they left it on a huge cliff hanger. Showtime didn’t promote it enough.

It was a great show with a great message, bummer

It is a great show. Should have been renewed and given more press.