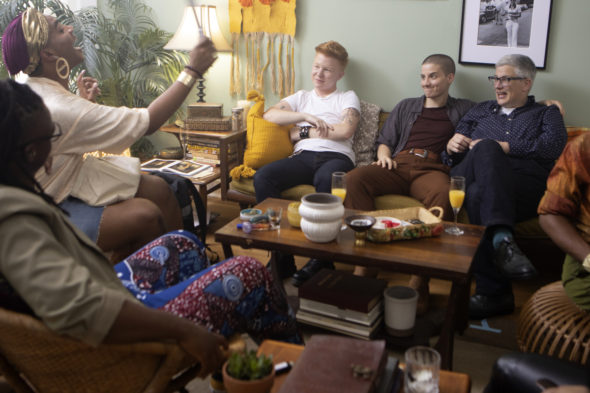 Will Abby find happiness in the first season of the Work in Progress TV show on Showtime? As we all know, the Nielsen ratings typically play a big role in determining whether a TV show like Work in Progress is cancelled or renewed for season two. Unfortunately, most of us do not live in Nielsen households. Because many viewers feel frustration when their viewing habits and opinions aren’t considered, we invite you to rate all of the first season episodes of Work in Progress here. *Status update below.

A Showtime single comedy series, Work in Progress stars Abby McEnany, Karin Anglin, Celeste Pechous, and Julia Sweeney. Abby McEnany (as a fictionalized version of herself) is a 45-year-old self-identified fat, queer dyke whose misfortune and despair unexpectedly lead her to a vibrantly transformative relationship. A finely-crafted cocktail of depression, OCD, queerness, and anxiety, Abby’s life is in a quiet and perpetual crisis, despite her ability to charm those around her with her self-deprecating and endearing personality. When her confident, suburban sister Alison (Anglin) determinedly sets her up with Chris (Theo Germaine), a younger, sexually explorative trans man, things start to radically shift in Abby’s mind in terms of her self-identity and self-worth. This allows her to rethink her choices and even confront actress Julia Sweeney (Sweeney), the woman who “ruined her life”. With the help of her acerbic best friend, Campbell (Pechous), Abby attempts to navigate her way through modern-day dating, therapy mishaps, rude co-workers, and more.

What do you think? Which season one episodes of the Work in Progress TV series do you rate as wonderful, terrible, or somewhere between? Do you think that Work in Progress on Showtime should be cancelled or renewed for a second season? Don’t forget to vote, and share your thoughts, below.

*1/13/20 update: Showtime has renewed Work in Progress for a second season.