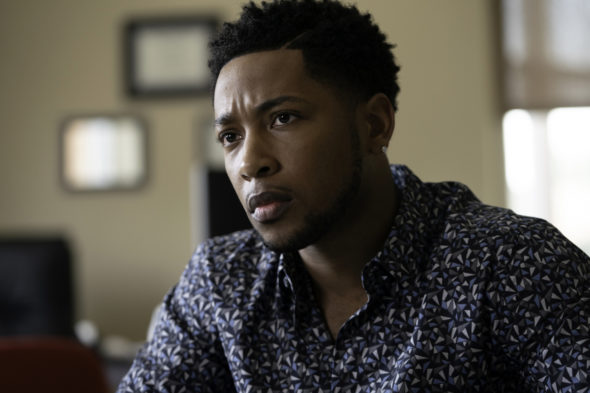 What will happen to this community in the third season of The Chi TV show on Showtime? As we all know, the Nielsen ratings typically play a big role in determining whether a TV show like The Chi is cancelled or renewed for season four. Unfortunately, most of us do not live in Nielsen households. Because many viewers feel frustration when their viewing habits and opinions aren’t considered, we invite you to rate all of the third season episodes of The Chi here.  *Status Update Below.

A Showtime drama, The Chi stars Ntare Guma Mbaho Mwine, Jacob Latimore, Alex Hibbert, Yolonda Ross, Shamon Brown Jr., Michael V. Epps, Birgundi Baker, and series creator Lena Waithe. In season three, guest stars include Luke James, Michael V. Epps, Alani “La La” Anthony, Lil Rel Howery, Cedric Young, Kandi Burruss, and Curtiss Cook. The story explores life on Chicago’s South Side and the series is filmed entirely in Chi-Town. It follows a group of Chicagoans who, at first, are connected by circumstance, but they then develop a bond, due to their loneliness, thirst for atonement, and hunger for a more meaningful life.

What do you think? Which season three episodes of The Chi TV series do you rate as wonderful, terrible, or somewhere between? Do you think that The Chi should be cancelled or renewed for a fourth season on Showtime? Don’t forget to vote, and share your thoughts, below.

*9/9/20 update: The Chi has been renewed for a fourth season by Showtime.

Please keep the Chi coming I look forward to Sunday nights. I have grown attached to the characters like family

Man. My family and I live this tv show I really hope it comes back with a season 4 and more to seasons to come after I look forward to watching this on Sunday night with the family

I am enjoying The CHI, I hope and pray it gets picked up for a fourth season. I hate that Jason Mitchell and the young lady who played his girlfriend, won’t be on there anymore, I really enjoyed watching them two. But I’m so happy to see my girl Kandi Burruss, on there. I didn’t really watch the show, but when I heard she was going to be on there, I knew I had to check it out. I had to go back and watch seasons 1 and 2 so that I could get to know the characters and understand… Read more »

The show is all over the place. The writers can not seem to keep up with a good story line. Keisha being kidnapped… for what? Who was that man? Ronnie just so happened to be allowed to use the bathroom in in the kidnapper’s home then break in with a crowbar that just so happens to be in the trash next to the house???? Now what? The kidnapper we knew nothing about is dead and what did this story line add to the show? What happened to the OG that killed the people who when killed his son in the… Read more »

I am waiting for season 4 and 5 maybe even a 6 . Keep up the good work , great story line a
little sad at times but very interesting and good entertainment during these sick times.

I feel where you coming from I can’t wait

I love the show, look forward to next episode even with the loss of characters. It gives you a peak into what life is like and makes you admire the kids that don’t get caught up in gangs or change their lifestyle. I’ve never been to Chicago but see all the negative news. Maybe people watching will have abetter appreciation and understanding what our youth deals with each day snd will help make better solutions that will give them a fighting chance. Every child needs to have a childhood knowing they are loved and encouraged to be successful. Educating people… Read more »

Have Showtime thru Hulu. Only one epidode sesson 3. Sad to see Brandon and possibly Kiesha leaving.