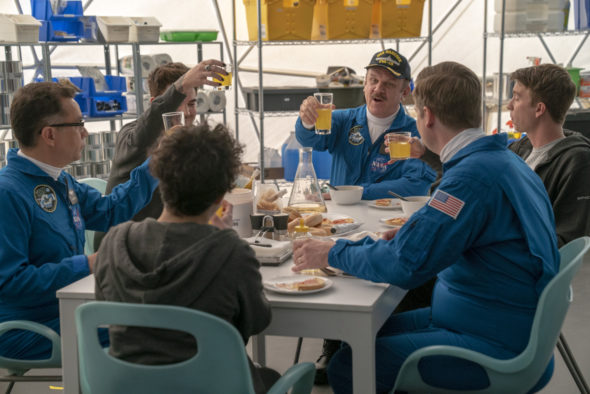 How far will this trio get in the first season of the Moonbase 8 TV show on Showtime? As we all know, the Nielsen ratings typically play a big role in determining whether a TV show like Moonbase 8 is cancelled or renewed for season two. Unfortunately, most of us do not live in Nielsen households. Because many viewers feel frustration when their viewing habits and opinions aren’t considered, we invite you to rate all of the first season episodes of Moonbase 8 here.

A Showtime astronaut comedy series, the Moonbase 8 TV show stars Fred Armisen, Tim Heidecker, and John C. Reilly. Set in the isolated desert of Winslow, Arizona at NASA’s Moon Base Simulator, this series follows eager (though subpar) astronauts. Doctor Michael “Skip” Henai (Armisen) is the son of an astronaut. Professor Scott “Rook” Sloan (Heidecker) is a Christian who wants to spread the Gospel of Jesus Christ in space. Their leader is Robert “Cap” Caputo (Reilly), a former helicopter pilot and supposed military veteran. As these astronauts attempt to qualify for their first lunar mission, they work vigorously to complete their training. A series of unexpected circumstances force the astronauts to question their own mental sanity, trust in each other, and whether or not they’re cut out for space travel.

What do you think? Which season one episodes of the Moonbase 8 TV series do you rate as wonderful, terrible, or somewhere between? Do you think that Moonbase 8 should be cancelled or renewed for a second season on Showtime? Don’t forget to vote, and share your thoughts, below.