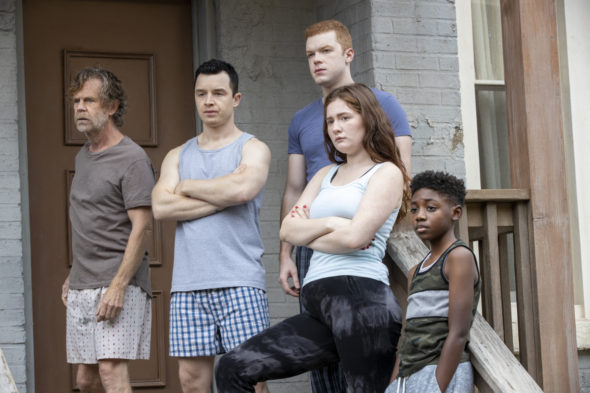 Where will the Gallaghers end up by the end of the 11th season of the Shameless TV show on Showtime? As we all know, the Nielsen ratings typically play a big role in determining whether a TV show like Shameless is cancelled or renewed for season 12 (in this case, we know it’s ending). Unfortunately, most of us do not live in Nielsen households. Because many viewers feel frustration when their viewing habits and opinions aren’t considered, we invite you to rate all of the 11th season episodes of Shameless here.

A Showtime comedy-drama series, Shameless stars William H. Macy, Jeremy Allen White, Ethan Cutkosky, Shanola Hampton, Steve Howey, Emma Kenney, Cameron Monaghan, Christian Isaiah, Noel Fisher and Kate Miner. The show follows alcoholic father Frank Gallagher (Macy) and his resilient, self-reliant kids who scramble to survive. The 11th season finds the Gallagher family and the South Side at a crossroads, with changes caused by the COVID pandemic, gentrification and aging to reconcile. As Frank confronts his own mortality and family ties in his alcoholic and drug-induced twilight years, Lip (White) struggles with the prospect of becoming the family’s new patriarch. Newlyweds Ian (Monaghan) and Mickey (Fisher) are figuring out the rules and responsibilities of being in a committed relationship while Deb (Kenney) embraces her individuality and single motherhood. Carl (Cutkosky) finds an unlikely new career in law enforcement and Kevin (Howey) and V (Hampton) struggle to decide whether a hard life on the South Side is worth fighting for.

What do you think? Which season 11 episodes of the Shameless TV series do you rate as wonderful, terrible, or somewhere between? Are you sorry that Shameless won’t be renewed for a 12th season on Showtime? Don’t forget to vote, and share your thoughts, below.

Hate that this show is over, has been my favorite since the first episode.

I cried, laughed, held my breath, and listened attentively to Franks philosophical speech about “living life” and not just existing. Kudos to the great writers, actors, screenplay. I thoroughly enjoyed this show, watching the growth of the kids and the stumblings of adulthood.Yes I will miss those damn Gallaghers but I thank them all for helping me to reset the gauges on my own life and to “Get on with the living” as only Frank Gallagher could teach us.

It will be very sad to see Shameless leave after season 11 they were always the best show that was streaming, it would be nice if they could stay longer but not holding my breath on that