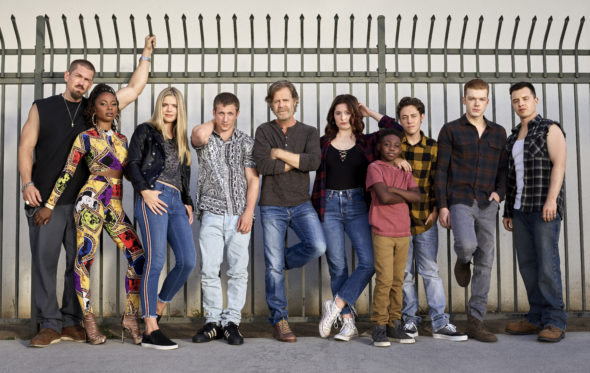 What new challenges will the Gallaghers face this time around? Has the Shameless TV show been cancelled or renewed for an 11th season on Showtime? The television vulture is watching all the latest cancellation and renewal news, so this page is the place to track the status of Shameless, season 11. Bookmark it, or subscribe for the latest updates. Remember, the television vulture is watching your shows. Are you?

Airing on the Showtime cable channel, Shameless stars William H. Macy, Jeremy Allen White, Ethan Cutkosky, Shanola Hampton, Steve Howey, Emma Kenney, Cameron Monaghan, Christian Isaiah, Noel Fisher, and Kate Miner with Jess Gabor, Amirah Johnson, Juliette Angelo, Abby Ross, and Nicole Munoz in recurring roles. The show follows alcoholic father Frank Gallagher (Macy) and his resilient, self-reliant kids who scramble to survive. The 10th season picks up six months after last season’s finale with Frank using his leg injury to collect as many prescription drugs as possible. Debbie (Kenney) steps in as the new Gallagher matriarch. Lip (White) navigates his relationship with a newly affectionate Tami (Miner). Carl (Ethan Cutkosky) has to decide what to do with his life. Liam (Isaiah) is committed to learning more about black history and culture under the tutelage of V (Hampton) as Kev (Howey) faces an identity crisis. Ian (Monaghan) and Mickey (Fisher) rekindle their romance in prison as both cellmates and lovers.

The 10th season of Shameless averaged a 0.24 rating in the 18-49 demographic and 847,000 viewers. Compared to season nine, that’s down by 32% and 18%, respectively. Find out how Shameless stacks up against other Showtime TV shows.

Will Showtime cancel or renew Shameless for season 11? Though this show’s been on for many years, it continues to be one of Showtime’s most popular series. Despite some cast changes, there’s been no talk of ending just yet so I suspect the series will be renewed. For now, I’ll keep an eye on the ratings and update this page with breaking developments. Subscribe for free alerts on Shameless cancellation or renewal news.

1/13/20 update: Showtime has renewed Shameless for an 11th and final season.

What do you think? Do you hope the Shameless TV show will be renewed for an 11th season? How would you feel if Showtime cancelled this TV series, instead?

I wouldn’t call it cancelled just put out of its misery.

The Gallaghers are like family to me. I would like to see this run as long as the TV series Gunsmoke ran. The actors are magnificent! I would miss this show greatly if it were cancelled but I know every good thing must come to an end. If it is cancelled after season 11 (which I am looking forward to watching) I want to thank the cast & crew for a Job well done.

I love this crazy show. I don’t want it tti o end

I love shamless and all the actors. It should have new seasons every year. I would love to see what happens with every one after season ten. Please dont cancell season 11. I really hope u play season 11. Love u all

I love shameless! Please do not cancel!!!!

It is time to end the show. It was a great show but it’s run it’s coarse. Sad to see it go but what it has become is even sadder

SHAMELESS should never be cancelled. I love the show, I love Frank, I love Carl, Liam is a cool kid. The producers should be creative in releasing new episodes year after year.

Love SHAMELESS. The entire cast is great…miss Fiona and hoping she’ll make an occasional appearance but they are a solid group and look forward each week to what’s going to happen next.