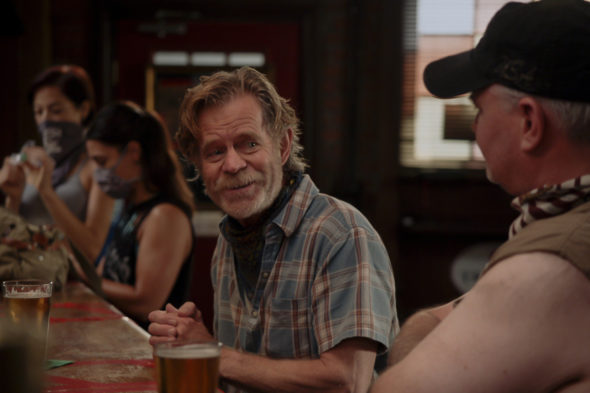 Will there be happy endings for this dysfunctional family? Has the Shameless TV show been cancelled or renewed for a 12th season on Showtime? The television vulture is watching all the latest cancellation and renewal news, so this page is the place to track the status of Shameless, season 12. Bookmark it, or subscribe for the latest updates. Remember, the television vulture is watching your shows. Are you?

Airing on the Showtime cable channel, Shameless stars William H. Macy, Jeremy Allen White, Ethan Cutkosky, Shanola Hampton, Steve Howey, Emma Kenney, Cameron Monaghan, Christian Isaiah, Noel Fisher and Kate Miner. The show follows alcoholic father Frank Gallagher (Macy) and his resilient, self-reliant kids who scramble to survive. The 11th season finds the Gallagher family and the South Side at a crossroads, with changes caused by the COVID pandemic, gentrification and aging to reconcile. As Frank confronts his own mortality and family ties in his alcoholic and drug-induced twilight years, Lip (White) struggles with the prospect of becoming the family’s new patriarch. Newlyweds Ian (Monaghan) and Mickey (Fisher) are figuring out the rules and responsibilities of being in a committed relationship while Deb (Kenney) embraces her individuality and single motherhood. Carl (Cutkosky) finds an unlikely new career in law enforcement and Kevin (Howey) and V (Hampton) struggle to decide whether a hard life on the South Side is worth fighting for.

The 11th season of Shameless averaged a 0.13 rating in the 18-49 demographic and 576,000 viewers. Compared to season 10, that’s down by 47% in the demo and down by 32% in viewership. Find out how Shameless stacks up against other Showtime TV shows.

We don’t need to wonder if Showtime will cancel or renew Shameless for season 12. The cable channel has already announced that season 11 is the end. Still, this may not be the end of the Gallagher clan. Could it be revived someday, ala the Dexter revival? Subscribe for free alerts on Shameless cancellation or renewal news.

What do you think? Do you wish that the Shameless TV show would be renewed for a 12th season? Are you sorry that this Showtime series is ending?

Shameless season 12 needs to return!!!!! This can not be the end

This can not be the ending of Shameless this show is all around to good and the family has gone through so much to be left off like that this show could be around for a much much longer time almost to a season 20 they still got so much to tell about their lives and what they are gonna do. Please keep this show !!

They cannot just leave it like that. All the crap that family went through an we have no idea what happened to them. Somebody better fix this. WTH

Shameless should renew for another season

I hope they renew it so bad

Please don’t cancel shameless there’s nothing else like this. There’s so many unanswered questions I hope someone picks up the show and continues it!!

I love shameless and was so sad by how they ended it.
Bring back a Carl spin off

Wow, such a great show but a terrible ending. Way too much unanswered questions. They need to at least make a spin-off or Season 12 ending with all questions answered. We wanna know how all the Gallagher’s ended up…Kev and V, too. Annnnnd we never got to find out what Fiona has been up to!

Do not cancel this show it is my life line!! My sanity something I look forward to watching every Sunday night please don’t take this luxury away!