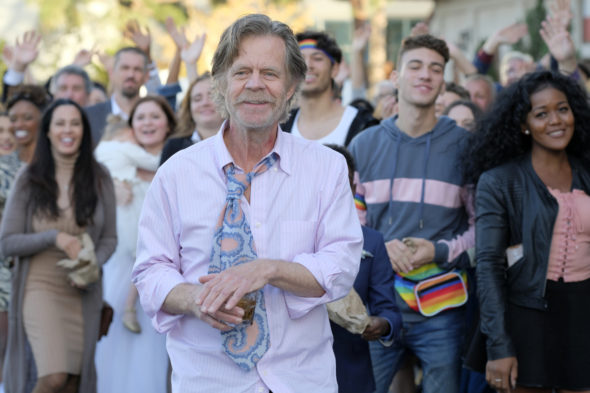 The end is near for the Gallagher family. Showtime has announced that the 11th and final season of the Shameless TV series will debut on Sunday, December 6th. It’s unclear how many episodes will be coming.

Here’s the Showtime press release, with some additional information:

LOS ANGELES – October 13, 2020 – SHOWTIME has announced the 11th and final season of its hit comedy series SHAMELESS will premiere Sunday, December 6 at 9 p.m. ET/PT. SHAMELESS, which originally premiered in the winter of 2011, ranks as the network’s No. 1 comedy and its longest-running series, and has the youngest-skewing audience of any SHOWTIME series. Season 10 of SHAMELESS aired its finale on January 26 and averaged 5.7 million weekly viewers across platforms.

The final season of SHAMELESS finds the Gallagher family and the South Side at a crossroads, with changes caused by the COVID pandemic, gentrification, and aging to reconcile. As Frank (William H. Macy) confronts his own mortality and family ties in his alcoholic and drug-induced twilight years, Lip (Jeremy Allen White) struggles with the prospect of becoming the family’s new patriarch. Newlyweds Ian (Cameron Monaghan) and Mickey (Noel Fisher) are figuring out the rules and responsibilities of being in a committed relationship while Deb (Emma Kenney) embraces her individuality and single motherhood. Carl (Ethan Cutkosky) finds an unlikely new career in law enforcement and Kevin (Steve Howey) and V (Shanola Hampton) struggle to decide whether a hard life on the South Side is worth fighting for.

What do you think? Are you looking forward to watching the final season of Shameless on Showtime? Are you sorry that it’s coming to an end?

Man. This was a great show. I caught on a little later and watched all the season. Wish good ones like this could stay. I think there is still more exploring these cool characters can do.

I love this show so much! It made me laugh so hard in sad times! Wish it wasn’t over. Thank you so much! God bless

I want Fiona back for the last season. Show is not the same without her & she should come back for a meaningful last season.

I am so sorry Shameless is having its last season. A friend told me to watch it and I binged watched it. I can’t wait till it starts the last season. Best show I ever watched!

This is such sad news yet I’m so excited too watch I bing watch it so now I have too prepare myself for a let down it will be gone after this season:( 🙁 🙁

Love the series, but last season was just awful. Lip is ultra boring now, and so is Ian, and Debbie. Kevin, and Vee storyline was lame last season also.
Just not gritty enough anymore, we watch them because they’re mess ups but the storylines are just not interesting anymore.