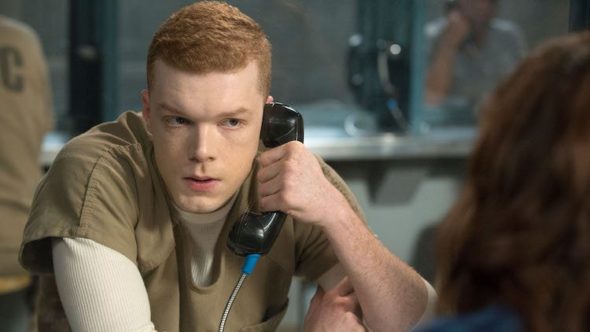 A familiar face is returning to Shameless. Recently, star Cameron Monaghan explained why he’s returning to the Showtime TV show for season 10, via The Hollywood Reporter.

Monaghan plays Ian Gallagher on the dramedy series, which centers on a working class family living on the South Side of Chicago. The cast also includes Emmy Rossum, William H. Macy, Ethan Cutkosky, Shanola Hamptom, Jeremy Allen White, Steve Howey, and Emma Kenney.
Last year, Monaghan announced his departure from Shameless. However, when Showtime renewed the series for season 10 recently, it was announced Monaghan would return as Ian. When asked about the quick return, Monaghan explained it was partly creative and partly a business decision that brought him back:

I’ve renewed [my contract] a number of times and it got to a point where I wanted to step away for creative reasons as well as business, which many other actors had done on the show years earlier. I took some time away and talked to showrunner John Wells about possible things we could do with the character in the future and we got to a place both creatively and financially where I felt comfortable coming back. Much of that had to do with what we are going to do with the story. I’m excited to go back and do that.”

And what will Ian be up to when season 10 of Shameless debuts on Showtime this coming fall? Monaghan says:

Now that we’ve torn him down … [and] instead of just looking for a relationship or resolving relationship conflict [it would be interesting] to instead [to see him] be working on himself. It’s interesting that Ian worked his way up, got his life on track and completely wrecked it. … Seeing him learn to lead the family and take care of himself and be on the straight and narrow … would be an interesting arc for him. I’d like to see something outside of just him searching and being single and hooking up with people.”

What do you think? Do you watch Shameless? Will you watch season 10?

His character is my least favorite on the show. I fast forward through all of his scenes because it has become old with the bipolar breakdowns, and the Gay Jesus storyline was annoying.
If you think about it Fiona, and Lip are waste of characters now because it is just a new Seasonal relationship every year.
Even Liam has better storylines!

I am happy to see Ian return for another season and look forward to tuning in. I have been a faithful viewer since the inception of Shameless!

I love this show! but please end it, they should of end it this season become the show won’t work without Emmy Rossum and I don’t to see this show to go down hill like other shows

Why?
Jobless.
Desperation.
Bills to pay.
This ship is sinking and his other show Gotham is ending so that’s why.

I am praying that Mickey is in the first episode and they get married in prison, that will solve the whole Ian looking for another love interset story and give him a reason tho pull himself together