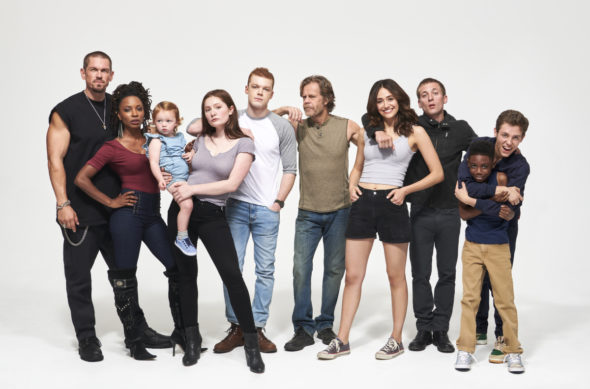 How much of a guilty (or shameless) pleasure is the ninth season of the Shameless TV show on Showtime? As we all know, the Nielsen ratings typically play a big role in determining whether a TV show like Shameless is cancelled or renewed for season 10. Unfortunately, most of us do not live in Nielsen households. Because many viewers feel frustration when their viewing habits and opinions aren’t considered, we’d like to offer you the chance to rate all of the Shameless season 10 episodes. **Status update below.

A dark Showtime dramedy, Shameless follows alcoholic father Frank Gallagher (William H. Macy) and his resilient, self-reliant kids who scramble to survive. The series also stars Emmy Rossum, Jeremy Allen White, Ethan Cutkosky, Shanola Hampton, Steve Howey, Emma Kenney, Cameron Monaghan, Richard Flood, and Christian Isaiah. This season, the cast also includes Scarlet Spencer. In the ninth season of Shameless, which includes the 100th episode, political passions overrun the South Side of Chicago, so the Gallaghers pursue their own brand of justice. While Frank becomes a voice for the everyman, Fiona (Rossum) winds up taking a big risk in hope of bigger rewards. Meanwhile, Kevin (Howey) and V (Hampton) are trying to rebrand the Alibi as a socially conscious business.

What do you think? Which season nine episodes of the Shameless TV series do you rate as wonderful, terrible, or somewhere between? Should Showtime cancel or renew Shameless for a 10th season? Don’t forget to vote, and share your thoughts, below.

Have had several shameless parties every week!! Good way to close the weekend (only way) !!

LOVE SHAMELESSAll the actors are great!! We have never missed an episode starting from season 1 !!

I love Shameless, it’s my obsession. We have Shameless Sunday’s at my house where we wear our Shameless t-shirts! I would love to see 5 more seasons. It would never end if it were up to me.