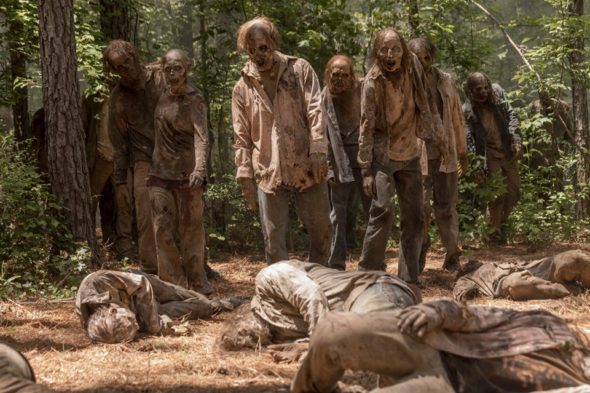 An AMC zombie apocalypse drama based on the Robert Kirkman comics, season 10 of The Walking Dead stars Norman Reedus, Melissa McBride, Danai Gurira, Josh McDermitt, Christian Serratos, Seth Gilliam, Ross Marquand, Jeffrey Dean Morgan, Khary Payton, Cooper Andrews, Avi Nash, Callan McAuliffe, Nadia Hilker, Eleanor Matsuura, Lauren Ridloff, Cailey Fleming, Samantha Morton, Cassady McClincy, and Ryan Hurst. The story started 10 years ago with one man trying to find his family. That family grew and gradually communities took shape. They fought and survived, thrived and gave birth to a new generation. The 10th season picks back up with the group in Oceanside as they continue to train in case The Whisperers return. Tensions are high as the heroes struggle to hold onto their concept of civilization.

What do you think? Which season 10 episodes of The Walking Dead TV series do you rate as wonderful, terrible, or somewhere between? Are you glad that The Walking Dead on AMC has been renewed for an 11th season? Don’t forget to vote, and share your thoughts, below.

*9/9/20 update: AMC has announced that The Walking Dead will end with an extended 11th season.

I hate cable services…..the only reason i do have it is because of AMC´s TWD universe…..never really commented before, but wanted to say season 10 this year has been kick ASS!!!

My family started having get togethers watching either The Walking Dead & The Fear Walking Dead. We don’t do this for any other show or movies. In fact when it’s season break we don’t see each other. We love both T.V shows amd normally don’t want AMC.

Love the show so unpredictable and you really get into the characters. you cry with them you laugh with them and you just wonder what it would feel like to walk around with dead skin on Negan really stepped up this season can’t wait to see what he does next season. And I really want to know where Rick went

I love the Walking Dead! Making Angela Kang the show runner was the best thing they have ever done. It’s one of those shows you don’t want to end, but you know it will eventually ☹️

I agree with Michelle. Why always kill off the original members of the group? Then bring on newbies all the time and expect us to “like” them. Sorry but the show isn’t the same any more.

I loved this show since season one and have been an rick grimes/andrew lincoln fan since❤, as this show gotten farther down the line it’s just not the same anymore and it’s not as good as it use to be and all the original actors of the show are all gone at least most of them since there is only 2 original actors of the show left on it and after they are no longer on it then it will be a whole new show as much as i loved the twd i dont know how much longer that i… Read more »