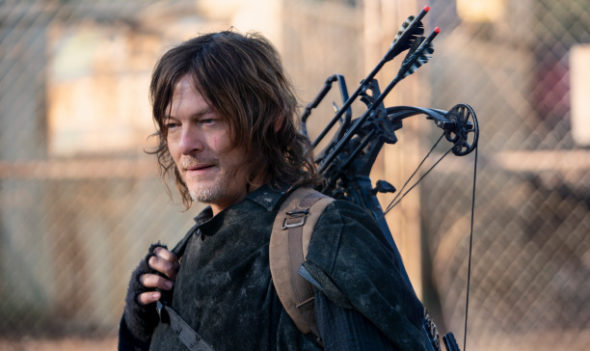 The end is closer than we thought. Tonight, AMC aired the 10th season finale of The Walking Dead and the channel also teased what’s to come. The 11th and final episode of the horror series will kick off on Sunday, August 22nd. There will be 24 episodes. All of the previous seasons have launched in October and typically have 16 installments each.

The 10th season was supposed to have the typical 16 episodes but was expanded by six episodes (which have all aired in 2021). The 10th season is averaging a 1.01 rating in the 18-49 demographic and 3.08 million viewers in the traditional ratings. Compared to season nine, that’s down by 46% and 38%, respectively.

Following tonight’s finale, AMC released a video of the cast and crew, discussing the six extra episodes, and a teaser about what’s to come in the final season.

Updated with the AMC press release:

“The world is ours. By right. We’ve come together for it. All of us.” – Rick Grimes

THE FLAGSHIP SERIES’ FINAL, EXPANDED SEASON KICKS OFF WITH 8 EPISODES

NEW YORK – April 4, 2021 – The epic journey to the series finale of AMC’s smash hit The Walking Dead will begin Sunday, August 22, as announced in a new teaser that ran during tonight’s Season 10 finale. The flagship series’ final, expanded season will kick off with eight new episodes, the first of a massive 24-episode story arc that will bring the show’s decade-long successful run to conclusion.

“Coming off of the six additional episodes for Season 10, which focused on smaller, character-driven stories, we’re excited to kick off Season 11 bigger than ever,” says Angela Kang, showrunner and executive producer of The Walking Dead. “The stakes will be high – we’ll see more zombies, tons of action, intriguing new stories, never-before-seen locations and our groups together in one community for the first time, trying to rebuild what the Whisperers took from them.”

“The final chapter of The Walking Dead begins with eight action-packed episodes that will feature the massive scope and scale fans have come to expect from TWD Universe, and I’m thrilled to share that fans won’t have to wait long for these incredible new episodes to debut this summer,” adds Scott M. Gimple, chief content officer of TWD Universe.

The Walking Dead shattered ratings records over ten seasons and remains the #1 series on basic cable for the 12th consecutive year, among A25-54 in L+3 viewing. Based on the comic book series written by Robert Kirkman and published by Image Comics, The Walking Dead is produced by AMC Studios and executive produced by Gimple, Kang, Kirkman, Gale Anne Hurd, Dave Alpert, Greg Nicotero, Joseph Incaprera and Denise Huth.

What do you think? Are you a fan of The Walking Dead TV series? Are you looking forward to the 11th and final season?

I hope that in the last TWD season to finally see Rick’s return and to have exciting progress with zombie virus treatment and a new start for surviving, which deserve it for all this fight they gave it!

All good things must come to an end, I watched Twd since it first premiered on tv and fell in love with Andrew Lincoln and favorite character of the show was Rick Grimes since the beginning but don’t get me wrong I liked other characters as well like Daryl and Carol and jesus, Morgan, michonne and many more but you get the point and I remember I kind of didn’t like negan at first but then he grew on me, they are all wonderful actors, I honestly was going to quit watching it because andy left the show but decided… Read more »

I love this walking dead . Wish I had took a chance to go try out for a part

It will be sad not to have it. But feel it is time. Just wish it would end on a happier note.