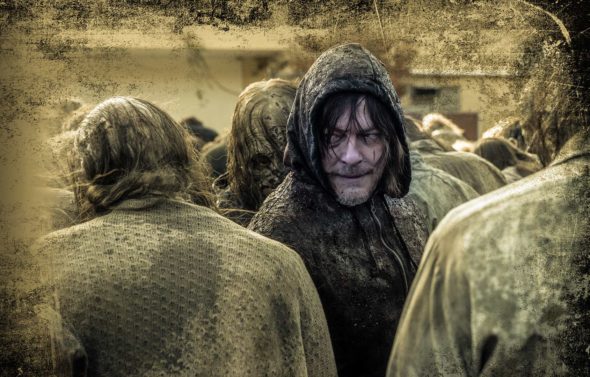 AMC has revealed the return date for season 10 of The Walking Dead. The horror series already aired its 10th “season finale” in October but the cable channel ordered six additional episodes to air after that. These half dozen installments will begin airing on Sunday, February 28th on AMC. Each episode will be released a few days earlier on the AMC+ streaming service. Robert Patrick and Hilarie Burton Morgan will guest in the new episodes and Okea Eme-Akwari has joined as a co-star.

Earlier this year, AMC announced that The Walking Dead would end with its 11th season of 24 episodes, which will be broken up over two years. The series is expected to end in late 2022 but new spin-offs are in the works.

Here’s AMC’s press release regarding the 10th season return, as well as a video of a table read:

AMC also released a new table read clip from one of the new episodes, “One More” featuring Ross Marquand, Seth Gilliam, Robert Patrick and narrated by Josh McDermitt which can be viewed here.

Last on The Walking Dead, we witnessed the fall of Alpha (Samantha Morton) and the end of the Whisperers War. The Kingdom had fallen, Hilltop was virtually destroyed and Alexandria abandoned to prepare for final battle. Our survivors were trapped and separated from one another. Yet, when faced with almost certain death, they rallied together to fight, killing Beta (Ryan Hurst) and eliminating the threat of the horde.

In these six new episodes, we find our survivors trying to pick themselves up by their bootstraps following the destruction the Whisperers left in their wake. The years of struggle weigh upon them as past traumas surface, exposing their more vulnerable sides. As they question the state of humanity, the state of their collective community, and the states of their minds, will they find the inner strength to persevere with their lives, friendships, and group intact?

New episode synopses and featured cast are below:

EPISODE 1017 – “Home Sweet Home”
Maggie (Lauren Cohan) has returned with a story she is not ready to share, even when her past catches up to her. Negan’s (Jeffrey Dean Morgan,) safety is at stake again. Daryl (Norman Reedus) and Maggie fight an unseen and unknown threat.
Director: David Boyd
Writers: Kevin Deiboldt & Corey Reed

EPISODE 1018 – “Find Me”
An adventure for Daryl and Carol (Melissa McBride) turns sideways when they come across an old cabin. It takes Daryl back to the years when he left the group after Rick disappeared as he relives a time that only the apocalypse could manifest.
Director: David Boyd
Writer: Nicole Mirante-Matthews

EPISODE 1019 – “One More”
Gabriel (Seth Gilliam) and Aaron (Ross Marquand) search for food and supplies to bring back to Alexandria. Small tragedies lead to bigger tragedies as faith is broken and optimism is fragmented when they are put to the ultimate test.
Director: Laura Belsey
Writers: Erik Mountain & Jim Barnes

EPISODE 1020 – “Splinter”
Eugene (Josh McDermitt), Ezekiel (Khary Payton), Yumiko (Eleanor Matsuura), and Princess (Paola Lázaro) are captured and separated. Princess struggles with memories of her traumatic past and tries to escape one way or another with the help of Ezekiel.
Director: Laura Belsey
Writers: Julia Ruchman & Vivian Tse

EPISODE 1021 – “Diverged”
Daryl and Carol come to a fork in the road and head their separate ways. Each going into their own type of survival mode, the easiest of challenges become much harder. Will their individual journeys be the tipping point needed to mend their friendship or is the distance between them permanent?
Director: David Boyd
Writer: Heather Bellson

EPISODE 1022 – “Here’s Negan”
Carol takes Negan on a journey, hoping to minimize the increasing tension. Negan reflects on the events that led him to this point and comes to a conclusion about his future.
Director: Laura Belsey
Writer: David Leslie Johnson-McGoldrick

In its current 10th season, The Walking Dead remains the #1 series on basic cable for the 11th consecutive year, among A25-54 in L+SD and L+3 viewing. The series has also given life to a vibrant and expanding content universe that currently includes Talking Dead, Fear the Walking Dead, The Walking Dead: World Beyond, a feature film being produced by Universal and Skybound, alongside AMC, focused on the Rick Grimes (Andrew Lincoln) character; a new spinoff planned for 2023 focused on the popular Daryl (Reedus) and Carol (McBride) characters; and the new Tales of the Walking Dead episodic anthology series.

About AMC
AMC is home to some of the most popular and acclaimed programs on television. AMC was the first basic cable network to ever win the Emmy® Award for Outstanding Drama Series with Mad Men in 2008, which then went on to win the coveted award four years in a row, before Breaking Bad won it in 2013 and 2014. The network’s series The Walking Dead is the highest-rated series in cable history. AMC’s current original drama series are Better Call Saul, Fear the Walking Dead, Soulmates, The Walking Dead, The Walking Dead: World Beyond and the forthcoming series 61st Street, Kevin Can F Himself and Pantheon. AMC also explores authentic worlds and discussion with original shows like Talking Dead, AMC Visionaries and Ride with Norman Reedus. AMC is owned and operated by AMC Networks Inc. and its sister networks include IFC, SundanceTV, BBC America and WE tv. AMC is available across all platforms, including on-air, online, on demand and mobile.

About AMC+
AMC+ is the company’s new premium streaming bundle featuring an extensive lineup of popular and critically acclaimed original programming from across AMC Networks’ entertainment networks and a number of the company’s targeted streaming services including Shudder, Sundance Now and IFC Films Unlimited, which feature content such as Riviera, Creepshow, A Discovery of Witches and Boyhood. Currently available to Amazon Prime Video Channels, Apple TV channels, Comcast Xfinity, DISH and Sling TV customers, AMC+ features a continually refreshed new library of commercial-free content, including Mad Men, Orphan Black, Portlandia, The Salisbury Poisonings, Gangs of London, Soulmates and The Walking Dead: World Beyond, among many others.

What do you think? Are you looking forward to watching the final six episodes of season 10 on AMC or AMC+?

As much as I loved this show it’s just not the same, I use to always looked forward to the next episode nowadays it’s just blend but I’m here until the end and I that it’s not going to have a stupid ending, twd:wb is kind of okay I guess, I hope they get all their people to safety on ftwd ! I also hope that the Carol and Daryl spin off will be just as good as when twd first appeared on tv