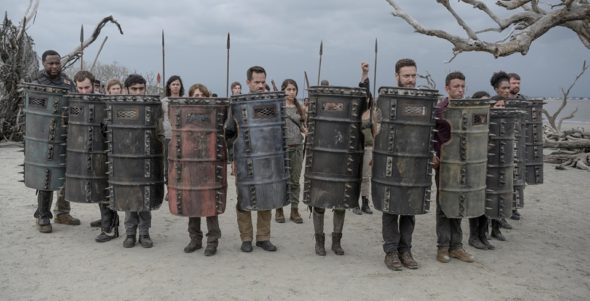 Is this show headed for the graveyard? Has The Walking Dead TV show been cancelled or renewed for an 11th season on AMC? The television vulture is watching all the latest cancellation and renewal news, so this page is the place to track the status of The Walking Dead, season 11. Bookmark it, or subscribe for the latest updates. Remember, the television vulture is watching your shows. Are you?

Airing on the AMC television network, season 10 of The Walking Dead stars Norman Reedus, Melissa McBride, Danai Gurira, Josh McDermitt, Christian Serratos, Seth Gilliam, Ross Marquand, Jeffrey Dean Morgan, Khary Payton, Cooper Andrews, Avi Nash, Callan McAuliffe, Nadia Hilker, Eleanor Matsuura, Lauren Ridloff, Cailey Fleming, Samantha Morton, Cassady McClincy, and Ryan Hurst. The story started 10 years ago with one man trying to find his family. That family grew and gradually communities took shape. They fought and survived, thrived and gave birth to a new generation. The 10th season picks back up with the group in Oceanside as they continue to train in case The Whisperers return. Tensions are high as the heroes struggle to hold onto their concept of civilization.

The 10th season of The Walking Dead averaged a 0.99 rating in the 18-49 demographic and 3.04 million viewers. Compared to season nine, that’s down by 47% and 39%, respectively. Find out how The Walking Dead stacks up against other AMC TV shows.

Despite some big ratings declines, The Walking Dead remains AMCs highest-rated scripted series and it’s already been renewed for season 11. I’ll keep an eye on the ratings and update this page with breaking developments. Subscribe for free alerts on The Walking Dead cancellation or renewal news.

9/9/20 update: AMC has announced that The Walking Dead will end with an extended 11th season.

What do you think? Are you glad that The Walking Dead TV show has been renewed for an 11th season? Are you sorry that season 11 will end the series?

OMGOSH I LIVE FOR THE WALKING DEAD!!! IT HAS ITS UPS AND DOWNS BUT STILL I LOVE IT.. I LAUGH CRY JUMP LOTS OF EMOTIONS GO THROUGH THIS SHOW AND ADRINLIN. They sure no the perfect spot to stop it to have to wait for next week to get here. Even bigger when we have to wait for next season OMGOSH WHAT A WAIT GRRRR. WELL WORTH THE WAIT THEY NEVER FAIL. i would love to have my whole house and my truck made up in the walking dead. I would have if I could aford it.. i would be… Read more »

I can’t stand TWD anymore. Everything changed. There’s currently only 2 characters in the show since Season 1, everyone else either died or left. Is about time to end before season 1 viewers like me can’t recognize this show anymore.

I only watch Amc when The Walking Dead is on ! I have watched every episode from the very beginning and I have even bought the DVD collection !! I hope that the show will continue for as long as I live!! It is a awsome story and it has everything from drama , action, love and horror and mystery !! Who could ask for more in a story line ! The soap operas do not even have that and some movies and other series do not have all those things at once in their story lines !!! The writers… Read more »

I only watch amc just to watch the walking dead

I think that new writer needs to be replaced. This story was all over the place. If it keeps up I doubt anyone will be watching. We loved the original cast members but now there are only 2. Not as much fun to watch as it used t be.