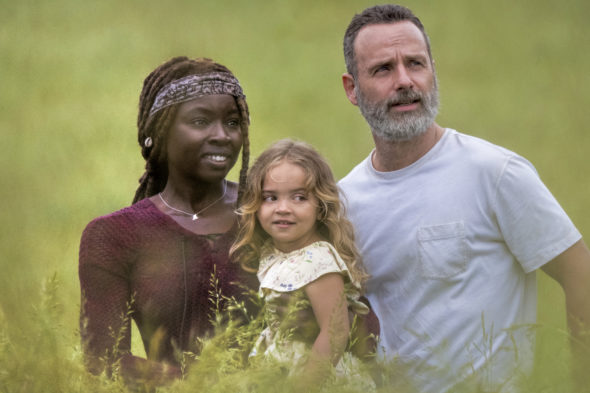 Will the survivors’ stand last? Is The Walking Dead TV show cancelled or renewed for a 10th season on AMC? The television vulture is watching all the latest cancellation and renewal news, so this page is the place to track the status of The Walking Dead, season 10. Bookmark it, or subscribe for the latest updates. Remember, the television vulture is watching your shows. Are you?

The ninth season of The Walking Dead on AMC kicks off a year and a half after the end of the war. Rick Grimes (Lincoln) is leading the survivors as they try to rebuild civilization. As time goes by, they face all kinds of obstacles, dangers, and yes, walkers, but none of them are ready for a new threat to the very idea of civilization itself.

The ninth season of The Walking Dead averaged a 1.88 rating in the 18-49 demographic and 4.95 million viewers. Compared to season eight, that’s down by 45% and 37%, respectively. Learn how The Walking Dead stacks up against other AMC TV shows.

It is hard to imagine AMC will cancel The Walking Dead, but the story may well be winding to a close. Key cast members seem to be on their way out the door. Even if the creative team is getting ready to wrap things up though, the cable network may still feel motivated to keep it on the air, so we’ll have to wait for word on when they’re planning to end the series. For now, I’ll keep a hungry eye on the Nielsen ratings and update this page with breaking developments. Subscribe for free updates on The Walking Dead cancellation or renewal news.

What do you think? Should AMC have renewed The Walking Dead TV show for a 10th season? How would you feel if they had cancelled this TV series, instead?

Absolutely not… should it be cancelled. Look forward to it every Sunday.

Please don’t ever stop The Walking Dead. I love the show however I was NOT happy with the story with Negan. I like him as an actor and hated to hate him. It was overly brutal. I hated to see Rick in that position.

OMG. Please make it stop. The show has turned into a yearly repetition. I’ve been watching since the beginning and fell in love with this show but stopped watching at the beginning of last year. A group of people wanted to find a home. They find a home. Some jerk weed comes in and starts killing everybody. They defeat. Wash, rinse, repeat… Year after year ad nauseam. Same story told in a different manner every season. I used to love the show but now I’m over it. For God’s sake let them find a cure, let them find a home,… Read more »

I agree with James about everything except to stop the show because I like it. This show could be great with some different writing. I have no idea what, but I think someone creative could figure it out.

When my daughter told me about the walking dead I was like yea maybe but since my first episode I was hooked I love this series I am a big fan please keep us on the edge of our seats.I would hate to hear that its not going to continue. Please keep making more.

I’d love the story to continue. Flits not about certain characters to me. Yeah I love many of them. I love watching and seeing the different problems that arrise at the end of the world and how people get through it. I’d love to see more. 🙂

I am thinking the show has reached it’s maximum ability to continue. I’ve been watching for 9 years and as of S8 I am disgusted with the AOW and S9 as as well. The Whisperers aren’t my cup of tea and just waiting for them to attack and Negan is to be the hero of that is very boring to me. I am also disgusted with FEAR as of S4 when Gimple took the reigns. It’s so stupid and lacks a bunch of nothing. I loved FEAR more than TWD since 2015 when it came on, but then the cross-over… Read more »

So sad the way they have let the great serious just die on the fine.

Mr.Big
Reply to  So sad the way they have let such a great series j

The vine not “fine”.

Yes, it was sad when Rick flew off into the sky; however, there are still so many outstanding and phenomenal characters. It really is not necessary to continue to follow the comics. The writers are quite talented and very capable of continuing the story and, we, your millions of fans will stay loyal. Just please keep Daryl, Carol, Negan, and, of course, Michonne as well as other special characters and we will all be happy. Don’t listen to the critics as they probably do not even watch the show. Please do not cut but continue with Action
!!!!!

Please renew the walking dead I binged watched it for 2 weeks. It’s sad Rick won’t be in it. Hopefully he will return one day. Love the show

it was so sad watching rick die… I thought I was gonna have a heart attack. RICK GRIMES WILL NEVER BE FORGOTTEN!!!!!!! I hope he returns as well.

I really want to find out what the garbage lady did with Rick!

Please renew the walking dead I binged watched it for 2 weeks. So wish Rick didn’t leave.

Stopped watching shortly after they introduced Negan. Gimple drove this show into the ground over the past few seasons, and there is no recovering from that.

I’m so angry over Carl being killed off last year and with Rick and likely Maggie leaving too, I’ll never watch another episode