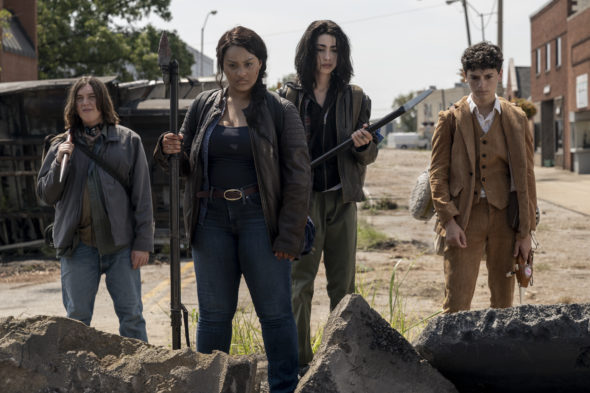 Is this a fool’s errand? Has The Walking Dead: World Beyond TV show been cancelled or renewed for a second season on AMC? The television vulture is watching all the latest cancellation and renewal news, so this page is the place to track the status of The Walking Dead: World Beyond, season two. Bookmark it, or subscribe for the latest updates. Remember, the television vulture is watching your shows. Are you?

Airing on the AMC channel, The Walking Dead: World Beyond follows the first generation raised in a surviving civilization of the post-apocalyptic world. The show stars Aliyah Royale, Alexa Mansour, Annet Mahendru, Nicolas Cantu, Hal Cumpston, Nico Tortorella, and Julia Ormond. The story begins following two sisters and two friends as leave a place of safety and comfort to brave known and unknown dangers and begin an important cross-country quest. Pursued by those who wish to protect them and those who wish to harm them, it’s a tale of growing up and transformation. The story unfurls across dangerous terrain, challenging everything they know about the world, themselves, and each other. Some will become heroes while others will become villains. In the end, all of them will be changed forever. Grown-up and cemented in their identities, both good and bad. A horror drama, this show is set in the universe of The Walking Dead TV series.

We don’t have to wonder if AMC will cancel or renew The Walking Dead: World Beyond for a second season. The cable channel ordered two seasons right out of the gate. However, it has been designated as a “limited series” so, there’s a chance that season two will be the end. I’ll update this page with breaking developments. Subscribe for free alerts on The Walking Dead: World Beyond cancellation or renewal news.

What do you think? Are you glad that The Walking Dead: World Beyond TV show has been renewed for a second season? How would you feel if AMC cancelled this TV series instead?

WB is so so bad and awful. Terribly unconvincing actors… no true plot or story….

Me and my husband both love the Walking Dead WB. We cannot wait for the 2nd season to start. Please don’t cancel this series!

Me and my husband both love the show. We can’t wait for the second season to start! Please continue this series!

This TV show is actually really good especially showing how children who have been sheltered from fighting the dead , yet are aware of their existence adapt to life on the road. The season 1 plots are really good as well, and especially Silas is a very interesting character. I rate 4/5 and i wait for the episodes every week :3

It should be cancelled, just a show about whiney teenagers who would not survive five minutes in this world. Terrible is too nice for this one.

Totally disagree with you!

Just awful overall. It’s hard to name one good actor/actress in this because they aren’t good. It’s a pass for me, I won’t watch it.

This show is horrible. Relatives must be voting on this because no sane person would give it above 1 star and the only reason it doesn’t get a zero is, zero isn’t an option. Terrible.