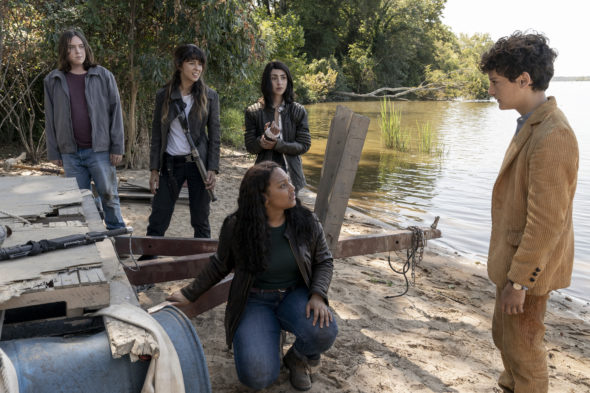 The Walking Dead: World Beyond has added a new name to its cast. Robert Palmer Watkins will recur in season two as Lieutenant Frank Newton, according to Deadline. Watkins appeared as a guest star in one episode of the AMC show’s first season. The actor previously played Dillon Quartermaine on ABC’s General Hospital.

The Walking Dead: World Beyond follows the first generation raised in a surviving civilization of the post-apocalyptic world. The show stars Aliyah Royale, Alexa Mansour, Annet Mahendru, Nicolas Cantu, Hal Cumpston, Nico Tortorella, and Julia Ormond. The story begins following two sisters and two friends as leave a place of safety and comfort to brave known and unknown dangers and begin an important cross-country quest. Pursued by those who wish to protect them and those who wish to harm them, it’s a tale of growing up and transformation. The story unfurls across dangerous terrain, challenging everything they know about the world, themselves, and each other. Some will become heroes while others will become villains. In the end, all of them will be changed forever. Grown-up and cemented in their identities, both good and bad. A horror drama, this show is set in the universe of The Walking Dead TV series.

The first season of The Walking Dead: World Beyond averaged a 0.24 rating in the 18-49 demographic and 881,000 viewers in the live+same day ratings.

The zombie series was given a two-season order right out of the gate.  A premiere date for season two has not been revealed.

What do you think? Are you a fan of The Walking Dead: World Beyond on AMC? Do you plan to watch season two?

Yes i really enjoy this show. It is just enough different Then the other two Walking Deads to make it very interesting. I can’t wait to see the next season.

teletubbies was more violent than this crap

I enjoyed series lookimg forward to 2

Horrible will not be watching.

I only watch cuz it’s connected to the story. My biggest pet peeve is the title. Why did they not call it Beyond The Walking Dead?

Hated it. Needs better actors and writing. Boring beyond all belief!!