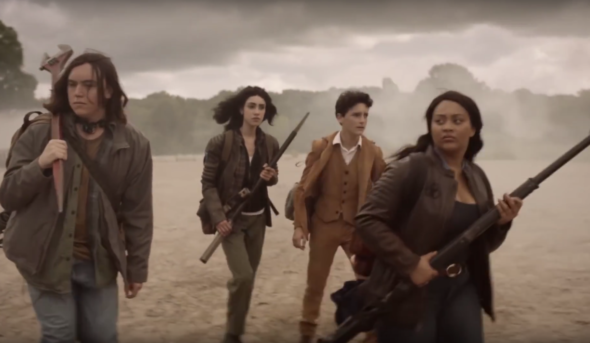 “We are the masters of our fate.” AMC has just released a first look at their upcoming Walking Dead spinoff TV show, Deadline reports.

The untitled drama series “will feature two young female protagonists and focus on the first generation to come-of-age in the apocalypse as we know it. Some will become heroes. Some will become villains. In the end, all of them will be changed forever. Grown-up and cemented in their identities, both good and bad.” The cast includes Aliyah Royale, Alexa Mansour, Annet Mahendru, Nicolas Cantu, Hal Cumpston, and Nico Tortorella.

At this year’s New York Comic-Con, executive producer Scott Gimple teased the new Walking Dead series, saying it takes place “10 years after the start of the apocalypse. This is one of those big things that is happening at the same time as The Walking Dead, but they don’t know about each other.”

The new spinoff series is set to launch on AMC in spring 2020.

What do you think? Are you a big fan of The Walking Dead? Will you watch the new spinoff series?

Zombies are starting to get dull and I’ surprised that they have been so popular for so long.

How about trawling for monsters and spooks that are just a little bit different.

There are plenty of them through history and legend.