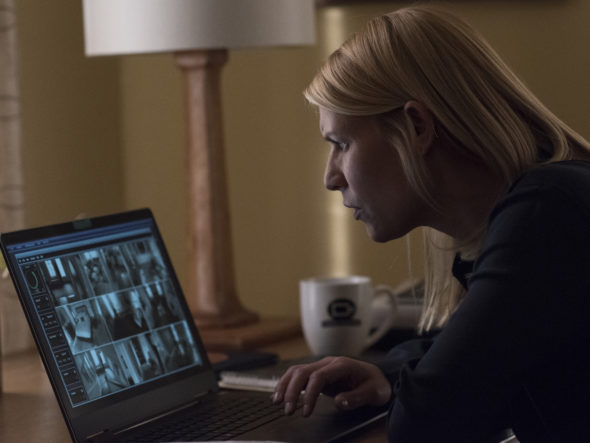 Does Carrie Mathison have much success during seventh season of the Homeland TV show on Showtime? As we all know, the Nielsen ratings typically play a big role in determining whether a TV show like Homeland is cancelled or renewed for season eight. Unfortunately, most of us do not live in Nielsen households. Because many viewers feel frustration when their viewing habits and opinions aren’t considered, we invite you to rate all of the Homeland season seven episodes for us here.

A Showtime political spy thriller, Homeland stars Claire Danes, Mandy Patinkin, Elizabeth Marvel, Linus Roache, Maury Sterling, and Jake Weber. Morgan Spector joins the cast as a series regular this year. After an assassination attempt, last season ended with President Keane (Marvel) breaking her promise to Carrie (Danes) and arresting 200 members of the intelligence community – among them, Saul Berenson (Patinkin). When season seven kicks off, Carrie has exited her White House job and is living with her sister Maggie (Amy Hargreaves) in DC. Now, she plans to take on the administration and fight for the release of the 200.

What do you think? Which season seven episodes of the Homeland TV series do you rate as wonderful, terrible, or somewhere between? Are you happy Showtime renewed Homeland  for an eighth season? Don’t forget to vote, and share your thoughts, below.

I wish it would not take so long to get to Google play.But also,they have to stop throwing Mandy patinkin around so much. The poor guy is in jail more than not,these day’s.And I would like to see him survive long enough to catch him on Broadway. So please, treat him like the man he is. He should be sitting in an office and running his hand over his head and saying G-d damn it,Carrie wtf. Or a dozen orther things. Respectfully, I love the show.But Yall can do anything ,please bring Rupert Friend back. Congrats on season 8.And if… Read more »

Love Homeland. Great characters, acting, story line. I only wish it wasn’t so long between seasons.

I hope this is not the last season. This is a well written character driven show. I love it and hope it goes on and on.

Other than Saul (perhaps Dar as well) the really good supporting cast members have left/expired like Brodie and Peter.. It’s become increasing mega doses of Carrie, which is probably too much for many. Compare “Berlin” Station” on Amazon and Epix (the latter streaming). Espionage Novels and shows are better when the CIA does it’s classic ( and statutory) role defending ourselves from enemies abroad or moles (like Tinker Tailor); not domestic politics and personality issues, real or not. It is simply time for something else more classic as in the earlier Homeland Seasons, and not watch the slippage. I know… Read more »