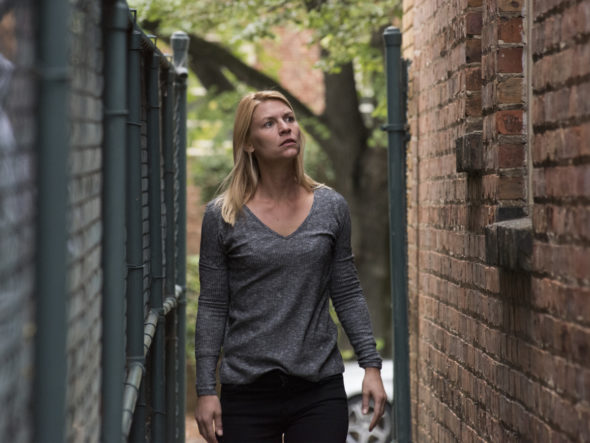 Is Carrie Mathison still in the fight? Has the Homeland TV show been cancelled or renewed for an eighth season on Showtime? The television vulture is watching all the latest cancellation and renewal news, so this page is the place to track the status of Homeland, season eight. Bookmark it, or subscribe for the latest updates. Remember, the television vulture is watching your shows. Are you?

A Showtime political spy thriller, Homeland stars Claire Danes, Mandy Patinkin, Elizabeth Marvel, Linus Roache, Maury Sterling, and Jake Weber. Morgan Spector joins the cast as a series regular this year. After an assassination attempt, last season ended with President Keane (Marvel) breaking her promise to Carrie (Danes) and arresting 200 members of the intelligence community – among them, Saul Berenson (Patinkin). When season seven kicks off, Carrie has exited her White House job and is living with her sister Maggie (Amy Hargreaves) in DC. Now, she plans to take on the administration and fight for the release of the 200.

The seventh season of Homeland averaged a 0.30 rating in the 18-49 demographic and 1.23 million viewers. Compared to season six, that’s down by 29% and 3%, respectively. Learn how Homeland stacks up against the other Showtime TV shows.

Since Homeland is already renewed through season eight, and is one of Showtime’s best ratings performers, there is no worries that it will be cancelled during this season. Showrunner Alex Ganza is working toward ending it with the eighth season, though. If this season proves a huge success and the network backs up the money truck, that could change. I’ll update this page with breaking developments. Subscribe for free Homeland cancellation and renewal alerts.

8/6/18 update: Showtime has confirmed that season eight is the end of the series. Details here.

What do you think? Are you happy the Homeland TV show is renewed through season eight. Do you think this Showtime TV series should be ending there? Would you like to see it continue (possibly without Danes)?

I personally hated that they killed Quinn off the show, I’d say that’s why ratings fell but I was hoping for more than 8 seasons this is and always will be the best show on tv by far maybe a reboot or spin off with original characters perhaps. Yes with Quinn pls bring us something back there is nothing better on tv atleast that grabs an audience like this show did. Thanks.

love this series pls do not cancel

Beyond tired of Danes bug eyed bewilderment & bi-polar plot lines. Speaking of plot lines…the current one blows! This series has moved past its sale date. Time to go.

Because you don’t like it anymore? Others enjoy it so I believe you are allowed to change channels.