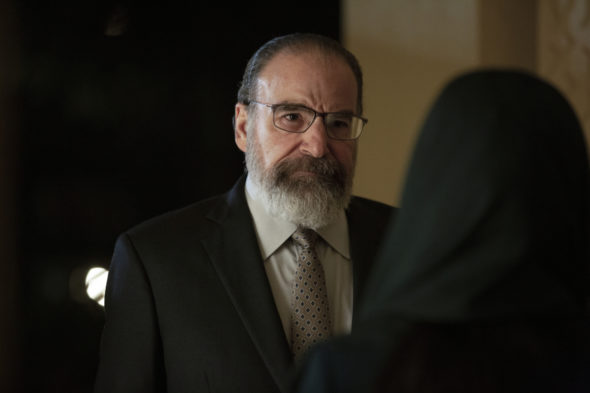 How will Carrie’s story end? Has the Homeland TV show been cancelled or renewed for a ninth season on Showtime? The television vulture is watching all the latest cancellation and renewal news, so this page is the place to track the status of Homeland, season nine. Bookmark it, or subscribe for the latest updates. Remember, the television vulture is watching your shows. Are you?

Airing on the Showtime cable channel, the Homeland TV show stars Claire Danes, Mandy Patinkin, Maury Sterling, Linus Roache, Costa Ronin, Nimrat Kaur, and Numan Acar. The series revolves around the ups and downs of Carrie Mathison (Danes), a Central Intelligence Agency officer with bipolar disorder. As the eighth season begins, Carrie is recovering from months of brutal confinement in a Russian gulag. Her body is healing, but her memory remains fractured and that’s a problem for Saul (Patinkin). He’s now National Security Advisor to the newly ascendant President Warner (Beau Bridges). The top priority of Warner’s administration is to end the “forever war” in Afghanistan, and Saul has been dispatched to engage the Taliban in peace negotiations. But Kabul teems with warlords and mercenaries, zealots and spies — and Saul needs the relationships and expertise that only his protégé Carrie can provide.

The eighth season of Homeland averages a 0.14 rating in the 18-49 demographic and 834,000 viewers. Compared to season seven, that’s down by 53% in the demo and down by 32% in viewership. Find out how Homeland stacks up against other Showtime TV shows.

We don’t have to wonder if Showtime will cancel or renew Homeland for season nine. It’s already been announced that season eight is the end. Could the show be revived at some point? I’ll update this page with breaking developments. Subscribe for free alerts on Homeland cancellation or renewal news.

What do you think? Were you hoping that the Homeland TV show would be renewed for a ninth season? Is season eight a good time to end this show?

i have just finished the last episode of Homeland. i have never before been so glued to a tv series. it is by far one of the absolute best i’ve ever watched. this last episode has left me sad – that there may be no more episodes….but hoping that they will again be picked up. Bravo to all connected with Homeland.

I love the show. Would love to see more seasons. Love political thrillers. Homeland is 1 of the best out there.

We would like a season nine, ten, eleven, etc…

Yes, I NEED season 9 of Homeland to happen it’s definitely a great show to continue. People wanna see bullets and fist throwing every five minutes but the story is what’s important! The acting is TOP NOTCH. It DEFINITELY has plenty of add on seasons potential, not to forget, the transition from one threat to another is FLAWLESS

Season 8 is the best of all the seasons of the show , definitely there should b a season 9.10.11,12 , as long as the producers keep it action packed and intriguing.

It looks like a whole new story line is possible. An interesting idea. How about. Election interference with Carrie on the inside

Homeland forever. I so love this show. I’m living in Liberia, West Africa, and it’s one of the few things in this dreary, and depressing situation that makes life worth living. Please just make it work;somehow!

There needs to be a 9th season…. last episode of season 8 was NOT a finale…. everything is unsettled and up in the air!

Homeland has been a show to look forward too. Carrie is such a positive character. She just pushes forward to make our country safe. We need this at this time with so much negativity on the air. Go CARRIE

I agree, keep homeland going . Don’t cancel series. One of the BEST SHOWS ON TV!!!

Can’t end like this must be a better way

I agree. Episode 10 was definitely not something you end with.

I hope they change their minds about this being the last season…we all waited way too long as it was for this season to begin. Love this show!