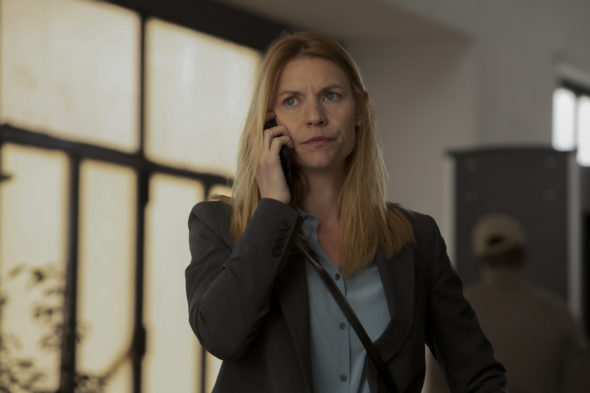 We don’t have to wonder if Homeland will be cancelled or renewed for season nine. Showtime has already announced that season eight is the end. But, how many people will tune in for the final episodes? It’s been nearly two years since the end of season seven. Will Homeland end with a big bang or a whimper? Stay tuned.

A political thriller drama, the Homeland TV show stars Claire Danes, Mandy Patinkin, Maury Sterling, Linus Roache, Costa Ronin, Nimrat Kaur, and Numan Acar. The series revolves around the ups and downs of Carrie Mathison (Danes), a Central Intelligence Agency officer with bipolar disorder. As the eighth season begins, Carrie is recovering from months of brutal confinement in a Russian gulag. Her body is healing, but her memory remains fractured and that’s a problem for Saul (Patinkin). He’s now National Security Advisor to the newly ascendant President Warner (Beau Bridges). The top priority of Warner’s administration is to end the “forever war” in Afghanistan, and Saul has been dispatched to engage the Taliban in peace negotiations. But Kabul teems with warlords and mercenaries, zealots and spies — and Saul needs the relationships and expertise that only his protégé Carrie can provide.

For comparisons: Season seven of Homeland on Showtime averaged a 0.30 rating in the 18-49 demographic and 1.23 million viewers.

What do you think? Do you like the Homeland TV series on Showtime? Should it be cancelled or renewed for a ninth season?

It should carry on …great show…brilliant acting

No ways should series 8 be final. “The show must go on”