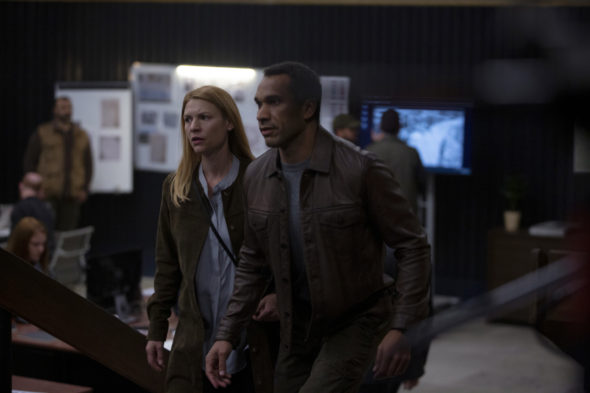 Is it possible for Carrie to find a happy ending in the eighth (and final) season of the Homeland TV show on Showtime? As we all know, the Nielsen ratings typically play a big role in determining whether a TV show like Homeland is cancelled or renewed for season nine (in this case, we already know it’s ending). Unfortunately, most of us do not live in Nielsen households. Because many viewers feel frustration when their viewing habits and opinions aren’t considered, we invite you to rate all of the eighth season episodes of Homeland here.

A Showtime political thriller drama, the Homeland TV show stars Claire Danes, Mandy Patinkin, Maury Sterling, Linus Roache, Costa Ronin, Nimrat Kaur, and Numan Acar. The series revolves around the ups and downs of Carrie Mathison (Danes), a Central Intelligence Agency officer with bipolar disorder. As the eighth season begins, Carrie is recovering from months of brutal confinement in a Russian gulag. Her body is healing, but her memory remains fractured and that’s a problem for Saul (Patinkin). He’s now National Security Advisor to the newly ascendant President Warner (Beau Bridges). The top priority of Warner’s administration is to end the “forever war” in Afghanistan, and Saul has been dispatched to engage the Taliban in peace negotiations. But Kabul teems with warlords and mercenaries, zealots and spies — and Saul needs the relationships and expertise that only his protégé Carrie can provide.

What do you think? Which season eight episodes of the Homeland TV series do you rate as wonderful, terrible, or somewhere between? Do you think that Homeland should have been renewed for a ninth season on Showtime? Don’t forget to vote, and share your thoughts, below.

Best of the best this Homeland. Why stop?

Please don’t cancel this show. It is very relevant. I really like the suspense and how it keeps you guessing. Please renew for several seasons.

Yes please continue with Season 9! This is the best show ever!!!

Please do NOT cancel Homeland at the end of season 8!! Please keep this outstanding series going!! It is the best show I have ever seen and I truly do not want to see it end. Still on the edge of your seat viewing – please do not cancel this very fine and relevant program!!

I totally agree with Susan R

SO so Sad this great show is ending!
Please please change your minds + keep it coming.

Keep the SHOW going pleaseeeeeeeeeee DO NOT CXL

I LOVE THIS PROGRAM & I’M SORRY IT’S GOING TO END!