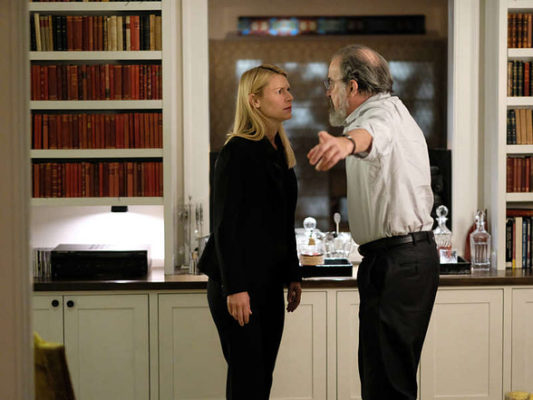 Are you a big Homeland fan? Recently, co-creator Alex Gansa spoke with Deadline about the Showtime series’ final episode and possible revival.

Speaking to Deadline, Gansa said that Carrie really did betray her country and Saul in the final episode of Homeland:

Gansa later revealed that the idea for Carrie’s book was last minute:

I didn’t have that idea until Wednesday morning, before we shot the scenes, on Thursday morning, and our amazing production designer John Kretschmer put that f*cking book together, got people to clear the photograph, put that glorious book together, wrote all the copy for the cover, the inside book jacket. So, I mean, just unbelievable, what he did in the time allotted. Unbelievable.

Well, the season is really founded on two big ideas, and you mentioned one of them, and that is this tactic of putting Carrie in the very last episode, in the very last season, in the same shoes that Brody was in, in the very first season. That idea was born on a bridge in Budapest, at the end of Season 7, when we were all standing around and watching that amazing scene between Claire and Mandy, and all of the sudden, it just struck me that my God, you know, Carrie really is in a very similar situation to Brody – having been in captivity. Now, Carrie, having been in captivity, and there was a crazily poetic justice to all of the sudden having her be the one under suspicion.

And what about a future revival for the Showtime series? Gansa says:

Well, that’s certainly true but I think what we were thinking more was to allow this story to continue in the imaginations of our fans. Not to abruptly end the story, but to let it continue, and let the people think about, my God, what happens next? Rather than answer that question, just let the hope of that carry you through.”

What do you think? Do you watch Homeland? Were you satisfied with the finale?

I agree that Homeland ended too soon. I would vote for more!

Homeland was outstanding. All of it. It would be SO EASY to pick up the story line from the season finale, in a 9th season. Why not? The ideas are so relevant, and the acting is outstanding.

It definitely ended too soon, so any form of revival is welcome by me.